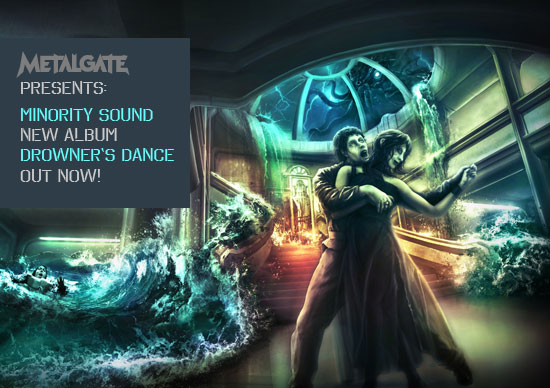 Why not to enjoy the last party, when the world is coming to an end? The veterans of the cyber metal squad MINORITY SOUND do not see the world in bright colors; quite the contrary, their previous coated vision rather corroded on their new album “Drowner’s Dance”. The ship is sinking, the rats are already on the run, but the captain, master of all creation, still pridefully steers it, unaware of the fact that he cannot best the coming storm. MINORITY SOUND keep their dynamic, energetic and thoroughly metal style. The electronic parts are in their case rather a plaything, which these heavy hitters from Prague treat like a bulldog treats a bone – frisking with it and gnawing at it with the jaw strength equivalent to a ten-cylinder engine. The apocalyptic disco is here, but this time giving more emphasis to orchestral arrangements than ever before. But fear not, the red meat laced with synthetic fibers still remains!

“Drowner’s Dance” is the third full-length piece of MINORITY SOUND. Successor to “The Explorer”, it was recorded in our very own MetalGate Studio, under the supervision of Libor Kukula, the frontman of ASCENDANCY. Mix and mastering went once again to the Canadian producer Rom di Prisco, who is known for his soundtracks to computer games, including Unreal Tournament III or the Need for Speed series. The thoroughly hydrated album art was created by Philip Budka.