Dear friends, please accept our invitation to a narcotic-chymical wedding of post-metal and sludge-doom, for today the vinyl split album "Fullmoon Alchemy Narcotic Session", which brings the union of two frontrunners of the Czech metal alternative - DROM and Blues For The Redsun - is officially released! Order now on MetalGate e-shop! 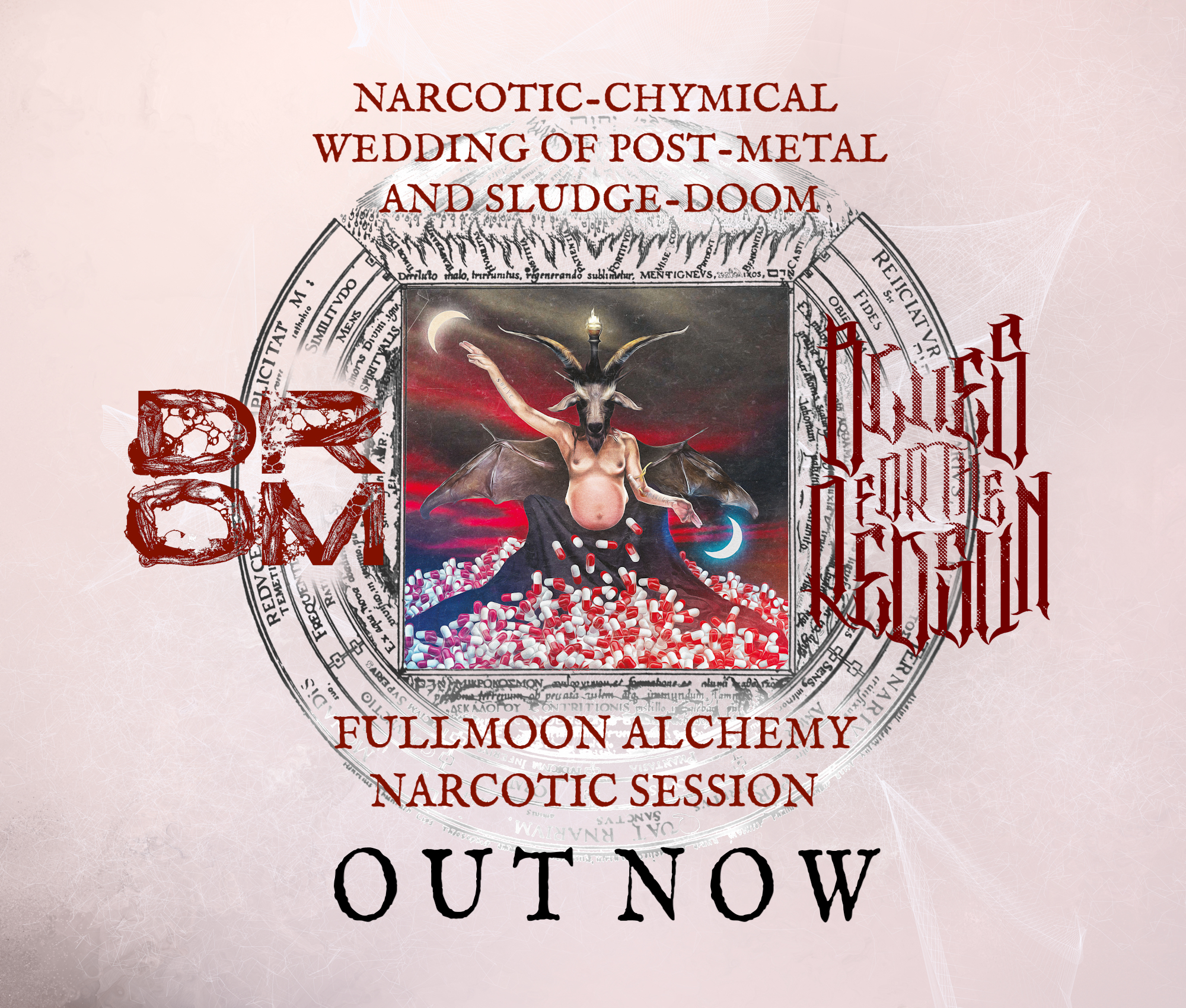 Two subgenre-wise different acts. Two different approaches to extreme music. One fundamental friendship between the bands. One central motif that permeates the whole piece like smoke in an opium den. All this and more is “Fullmoon Alchemy Narcotic Session” – the latest split album from our production, which we are unleashing today on vinyl! The cooperation of DROM (post-metal) and BLUES FOR THE REDSUN (sludge-doom) stems from joint gigs and tours that birthed a strong bond between both acts. The origin of the thematic side of the album is then to be found in the occupations of both band leaders, since Kubanec (BLUES FOR THE REDSUN) as well as Charlie (DROM) work in substance abuse prevention programs, whereby this environment informed the content of “Fullmoon Alchemy Narcotic Session”.

Now let us consider not only the background and visions of both bands, but also the genesis of this particular piece, as these proceeded separately for each act.

LThe post-metal/hardcore act DROM was established in 2010 in Liberec. Their inspiration stems mainly from life itself, the world and music in general. The band also strongly accentuates human rights and ecological responsibility:

“The civilization asks no one. It took away our sanity and destroyed our compassion. With clockwork tempo we are devastating life in its almost every form, convinced of the superiority of our kind. But it is only us, whom we are betraying. It will be our children, who will drink the water we poison, and the life extinguish will ultimately be our own.”

DROM recorded their part early this year on home turf in the Resound Studio, under the supervision of Martin Havlen, during several cold evenings of the coming spring. The outcome is almost 20 minutes long opus “V tanci světel”, which is thus far the longest song the band ever wrote.

BLUES FOR THE REDSUN from the foothills of Beskydy mix sludge/doom with other metal and even non-metal elements (and if the name does sound a bit familiar, it may be because of the second album of the U.S. stoner metal act KYUSS, the name of which our guys chose as their band name). The band credo is simple – to play as slowly as possible:

“We wanted to perform slow music, so we began […] From ambient/sludge filled with feedback loops, we are now gradually getting to what we want to play.”

BFTRS headed to Spring Studio for their part, with mixing and mastering being then taken care of by Dark Ceremony, which is an enterprise of the drummer from the brutal death metal outfit Cranial Carnage.

The frontrunner Kubanec reflects upon the album thusly:

“The title of the collaboration Fullmoon Alchemy Narcotic Session refers to night life risks, especially those related to substance abuse. It may be abstract and not apparent, but that is precisely the point. This is why even the album art (by Ondřej “Vlk”) is on one hand kitsch, but on the other hand leaves plenty room for fantasy…”

Real drug abuse is ultimately no fun as we all know. Yet, there is no need to fear the company of DROM and BLUES FOR THE REDSUN, since the trip they offer is potent, but nonetheless virtual, experienced through music, which is as diverse as the dealer’s offerings. Soar into phantasmal heights with DROM, only to fall into abysmal depths with BLUES FOR THE REDSUN. Then return to reality, thankful it was only a mirage, and take heed. So, if you dare to join, the trip is about to get underway.

In cooperation with MarastMusic.com, we are once again streaming the album in full, so feel free to drop by and give this unique musical confluence a listen: