Dear friends, before we move on in the presentation of our upcoming label related activities, there is one loose end to tie up. Though the new album "MANTA" of the Lovecraftian post-rock project Postcards from Arkham is out for some time now, our Lovecraftian mystery tale that accompanied the whole enterprise is missing its ending.

Of course, a remedy is in order, so let us invite you one more time to the legendary Arkham for the conclusion of the case of the Orphic Assembly of Manta Primordialis: 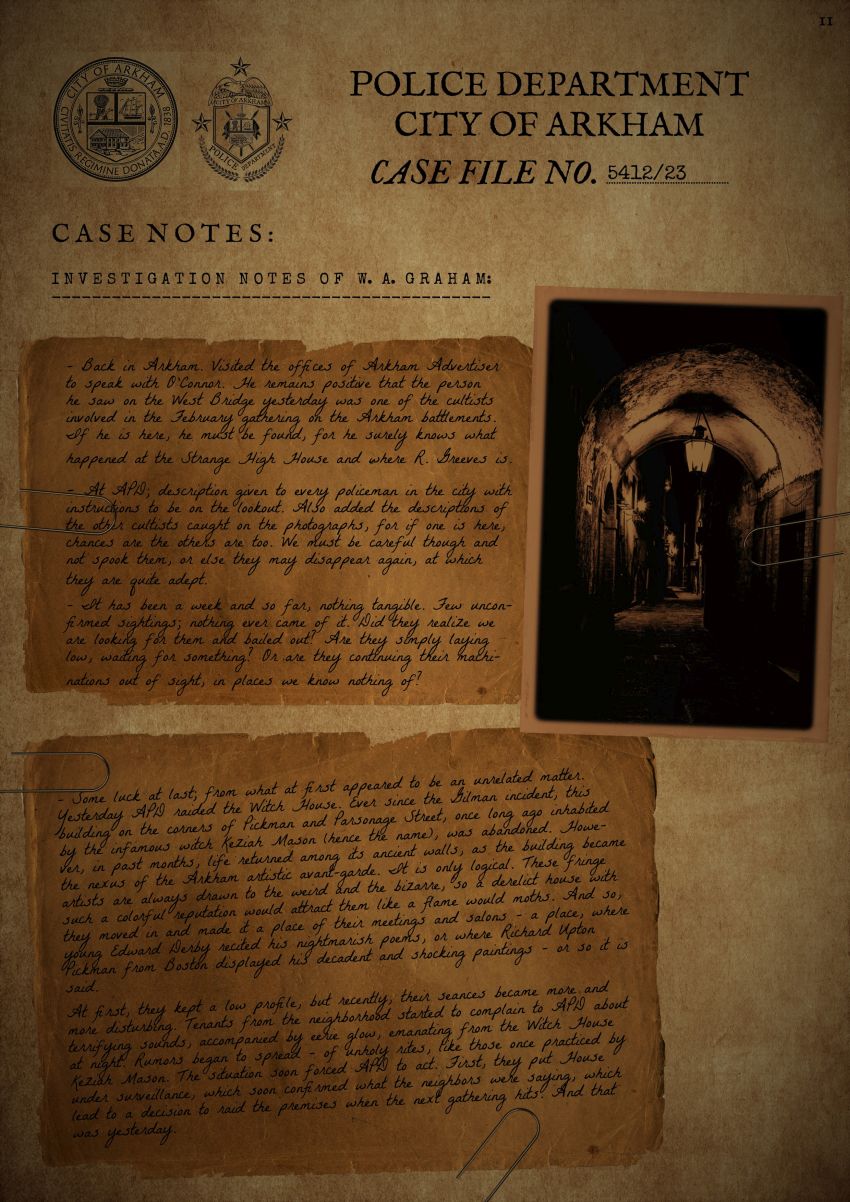 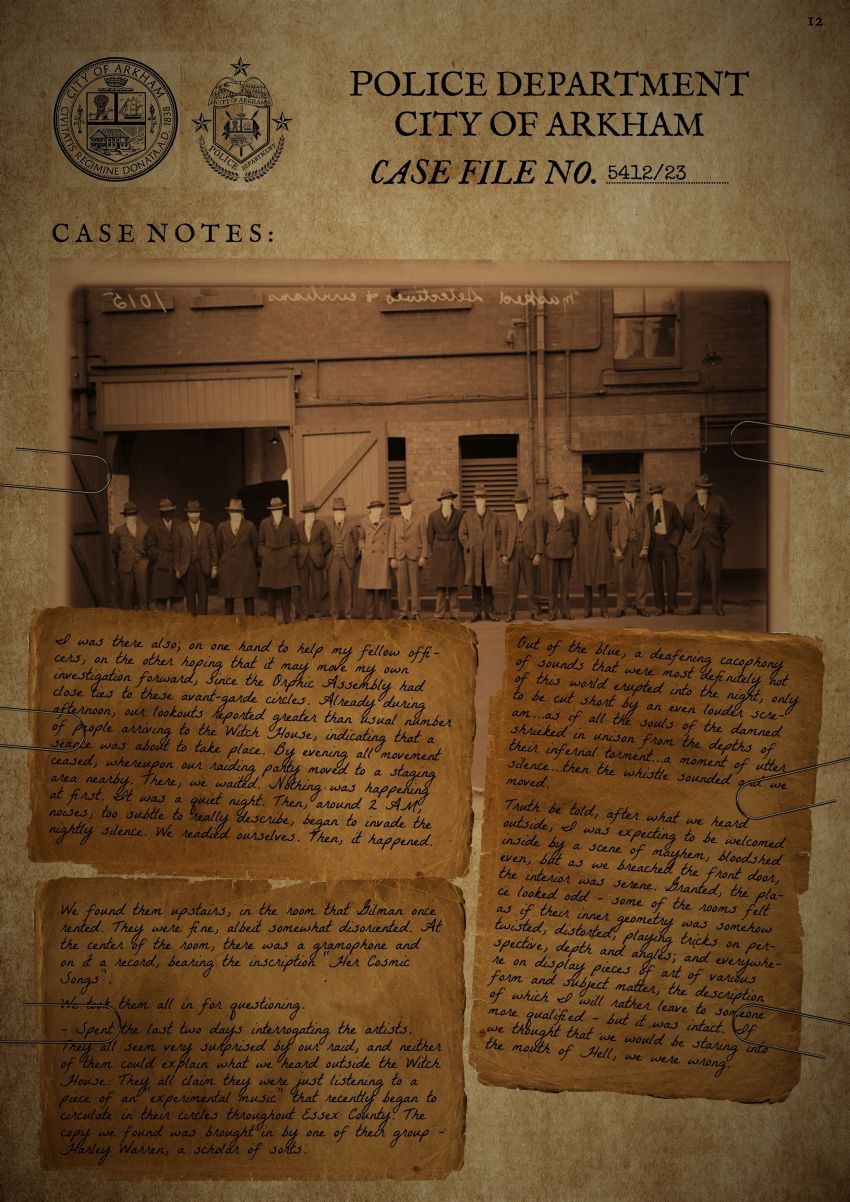 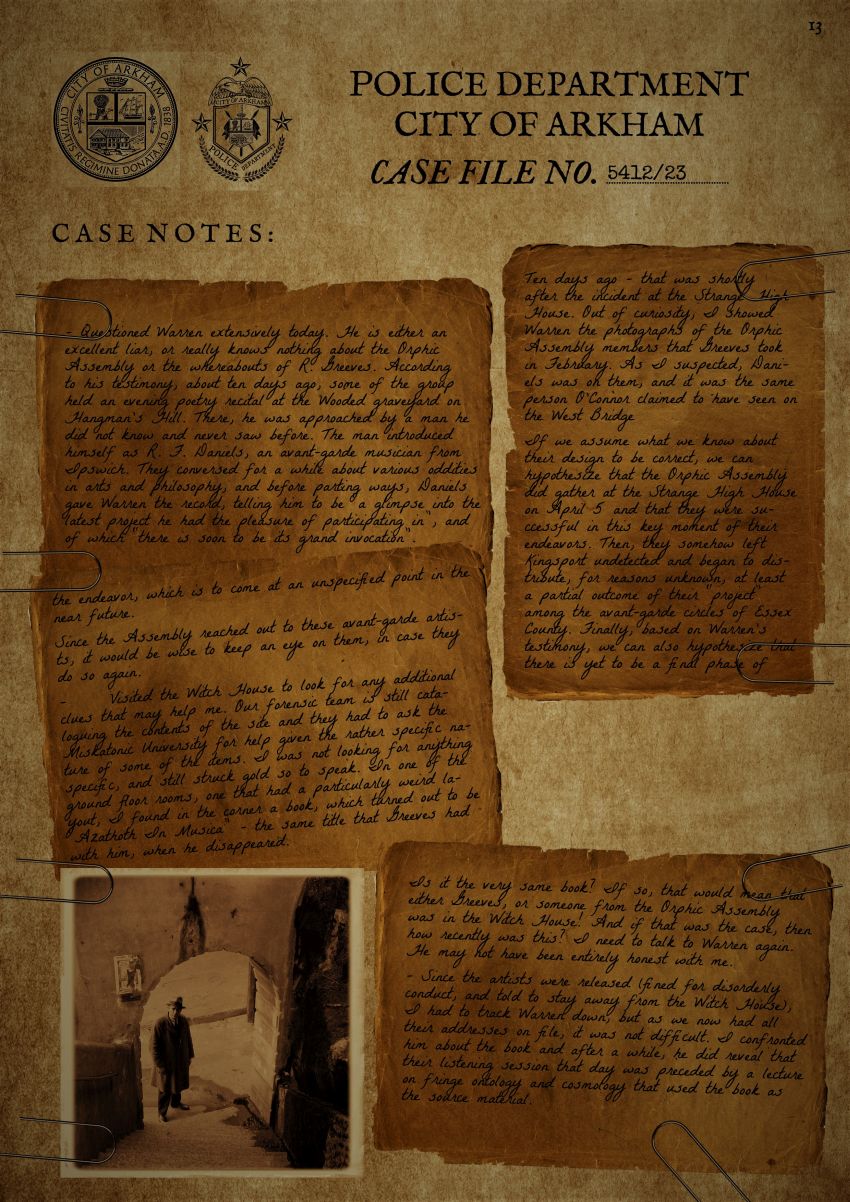 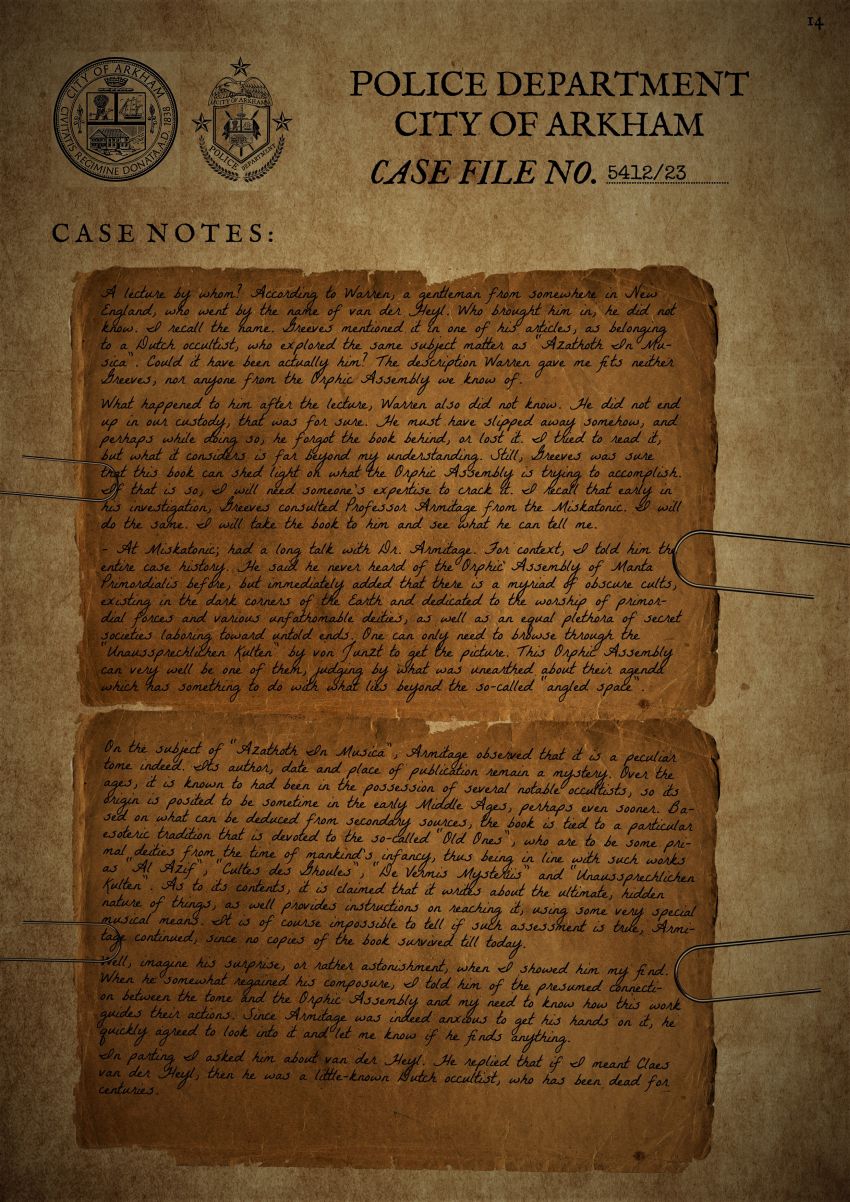 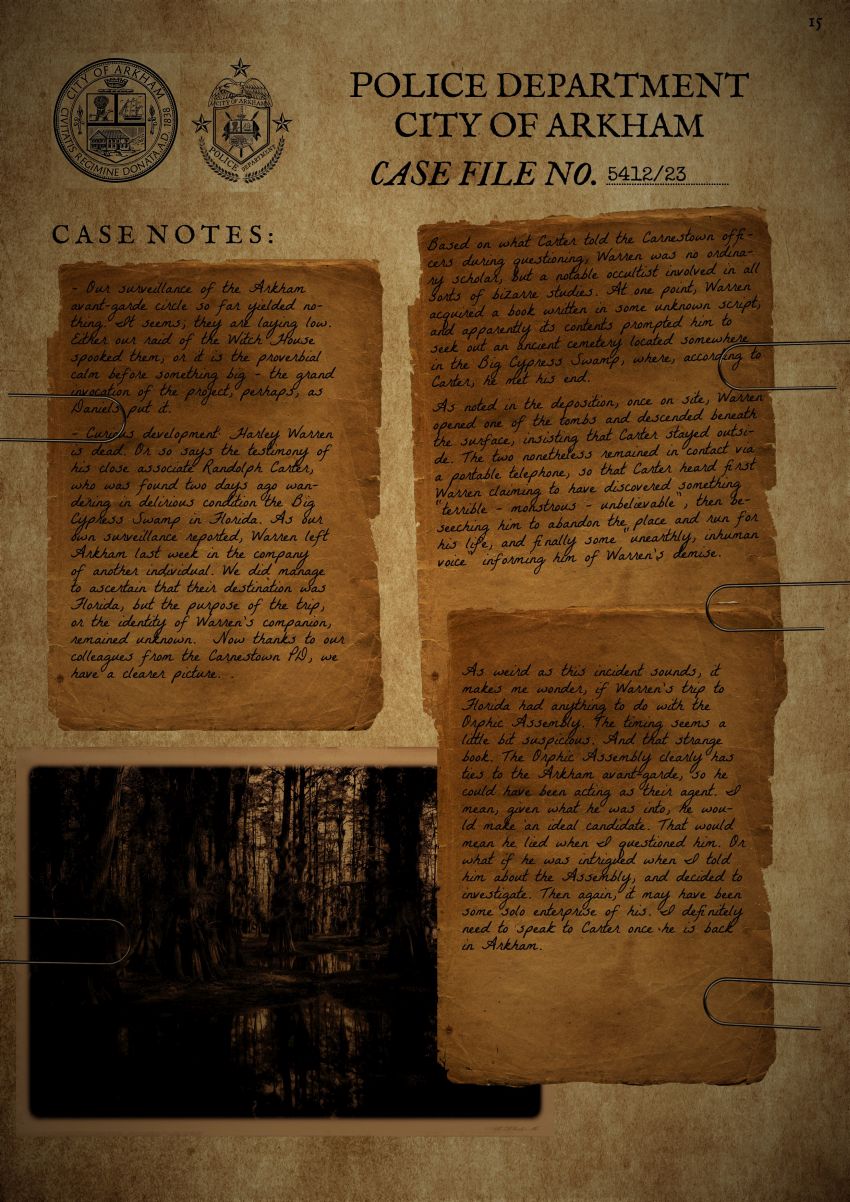 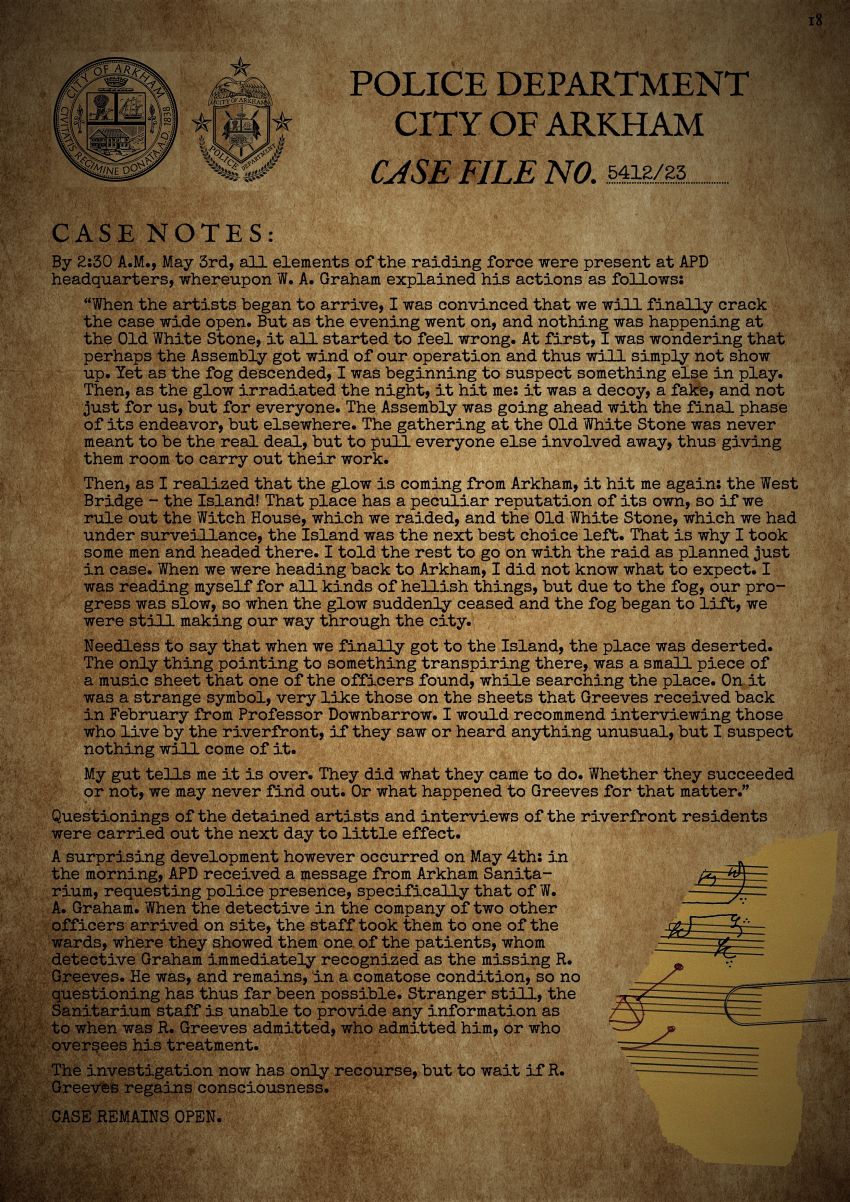 As usual, we have for you a transcript for an easier read:

INVESTIGATION NOTES OF W. A. GRAHAM

The ongoing investigation into the disappearance of R. J. Greeves, reporter of Arkham Advertiser, established the organization known as the “Orphic Assembly of Manta Primordialis” as the primary suspect responsible for said disappearance. Further inquiry revealed a connection between said organization and circles of resident avant-garde artists. On April 29, W. A. Graham, in charge of the investigation, obtained evidence of a planned mass meeting between the two subjects to take place May 2nd, at the Old White Stone north of the Arkham outskirt. Given the high chance of apprehending the suspects, APD Chief Inspector Reynolds issued an order to raid this meeting.

Since early hours on May 2nd, a series of covert lookout posts were established alongside the Dark Ravine to keep the area of the Old White Stone under surveillance, since the exact time of the meeting was not specified in the obtained evidence. The site of the Old Chapman Farm House was chosen as the staging area for the raid forces that arrived at 10:15 A.M., as well as the command post for the entire operation.

First unusual movement around the target area was reported in late afternoon, around 5:45 P.M., as the artists began to arrive to the site in small groups, as well as individually. Several attendees approached using the Ravine Lane, which runs in close proximity to the Farm House, yet fortunately, the presence of APD forces remained undetected.

By 7 P.M., the influx to the site ceased. Surveillance estimated that around 40 people were now present, yet was unable to confirm the presence of any of the known members of the Orphic Assembly. By 8:30 P.M., surveillance reported the crowd becoming agitated, which was evaluated as an indication that the event is about to commence. An order was issued for the APD raiding force to quietly move out of the staging area into the Ravine. Around the same time, the officers at the command post observed a thick fog forming within Arkham, entirely obscuring the view of the city approx. 20 minutes later.

By 9 P.M., surveillance reported fires being lit in the target area, but no other unusual activity. Surprisingly, nothing was going on at the Old White Stone. Two hours later, another report was received, indicating that the crowd is getting increasingly restless and is about to disperse. An order was issued for the APD forces to move in and apprehend all present.

However, when the APD forces began to move, the entire area was suddenly illuminated by a bright glow, whose source was after a while identified as being somewhere in Arkham. Closer localization was impossible due to the heavy fog still obscuring the city. The phenomenon threw our forces, as well as the gathered crowd into chaos. Before the situation could be properly assessed and order restored, it was discovered that half of the raiding unit, under the direct command of W. A. Graham, was on its way back to Arkham, and that the same has ordered the other half of the raiding force to move in on and secure the Old White Stone.

At 11:55 P.M. the glow suddenly ceased and the fog began to disperse. Shortly thereafter, the elements of the raiding unit that remained on site returned to the staging area with some 30 detainees. The rest managed to escape in the commotion. These were then taken to APD headquarters for questioning, while contact was reestablished with Graham and the remainder of the raiding force, who were currently securing the Island in the Miskatonic.

By 2:30 A.M., May 3rd, all elements of the raiding force were present at APD headquarters, whereupon W. A. Graham explained his actions as follows:

“When the artists began to arrive, I was convinced that we will finally crack the case wide open. But as the evening went on, and nothing was happening at the Old White Stone, it all started to feel wrong. At first, I was wondering that perhaps the Assembly got wind of our operation and thus will simply not show up. Yet as the fog descended, I was beginning to suspect something else in play. Then, as the glow irradiated the night, it hit me: it was a decoy, a fake, and not just for us, but for everyone. The Assembly was going ahead with the final phase of its endeavor, but elsewhere. The gathering at the Old White Stone was never meant to be the real deal, but to pull everyone else involved away, thus giving them room to carry out their work.

Then, as I realized that the glow is coming from Arkham, it hit me again: the West Bridge – the Island! That place has a peculiar reputation of its own, so if we rule out the Witch House, which we raided, and the Old White Stone, which we had under surveillance, the Island was the next best choice left. That is why I took some men and headed there. I told the rest to go on with the raid as planned just in case. When we were heading back to Arkham, I did not know what to expect. I was reading myself for all kinds of hellish things, but due to the fog, our progress was slow, so when the glow suddenly ceased and the fog began to lift, we were still making our way through the city.

Needless to say that when we finally got to the Island, the place was deserted. The only thing pointing to something transpiring there, was a small piece of a music sheet that one of the officers found, while searching the place. On it was a strange symbol, very like those on the sheets that Greeves received back in February from Professor Downbarrow. I would recommend interviewing those who live by the riverfront, if they saw or heard anything unusual, but I suspect nothing will come of it.

My gut tells me it is over. They did what they came to do. Whether they succeeded or not, we may never find out. Or what happened to Greeves for that matter.”

Questionings of the detained artists and interviews of the riverfront residents were carried out the next day to little effect.

A surprising development however occurred on May 4th: in the morning, APD received a message from Arkham Sanitarium, requesting police presence, specifically that of W. A. Graham. When the detective in the company of two other officers arrived on site, the staff took them to one of the wards, where they showed them one of the patients, whom detective Graham immediately recognized as the missing R. Greeves. He was, and remains, in a comatose condition, so no questioning has thus far been possible. Stranger still, the Sanitarium staff is unable to provide any information as to when was R. Greeves admitted, who admitted him, or who oversees his treatment.

The investigation now has only recourse, but to wait if R. Greeves regains consciousness.