Dear friends, though the new album "MANTA" of the Lovecraftian post-rock project Postcards from Arkham is out, that is not the end of it. On one hand, there are still the Busking Rituals to come, on the other hand, we have not reached the finale of the story, which accompanied this piece from the very beginning, either. So, onward to its next part: 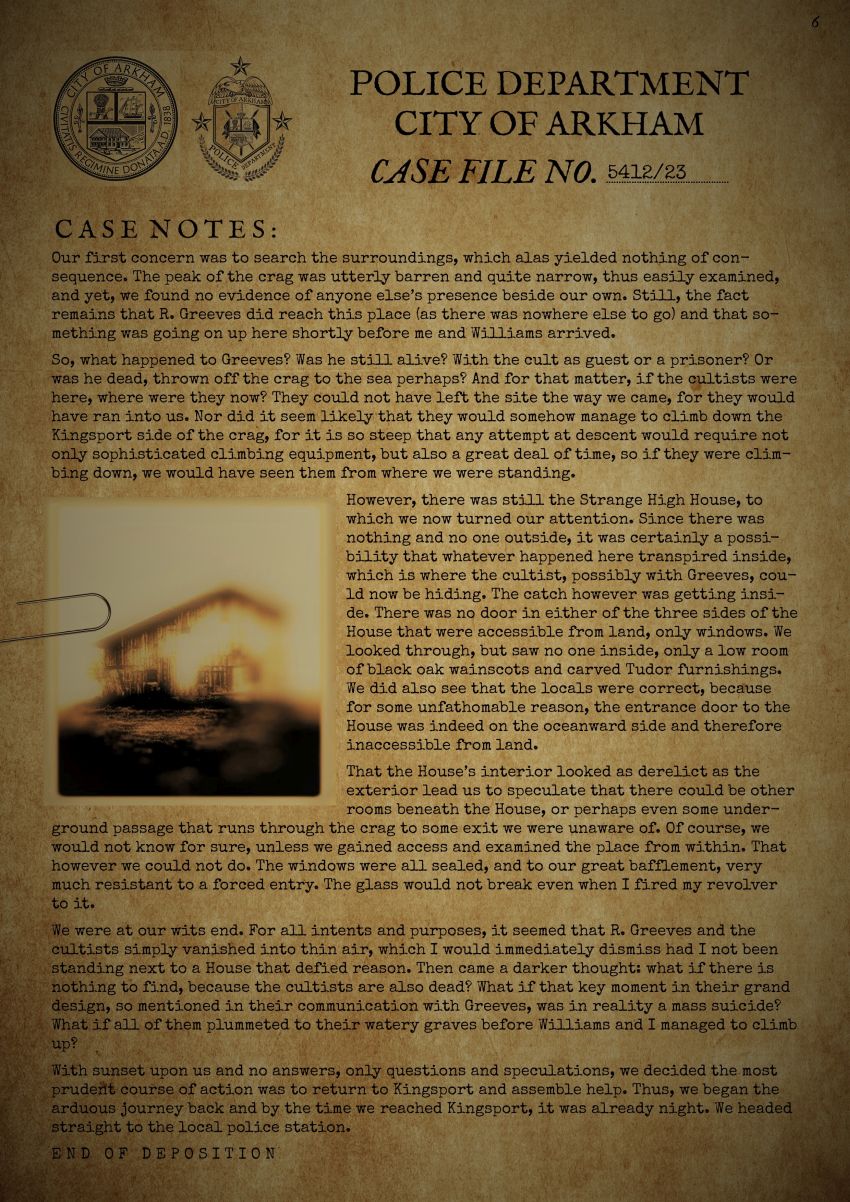 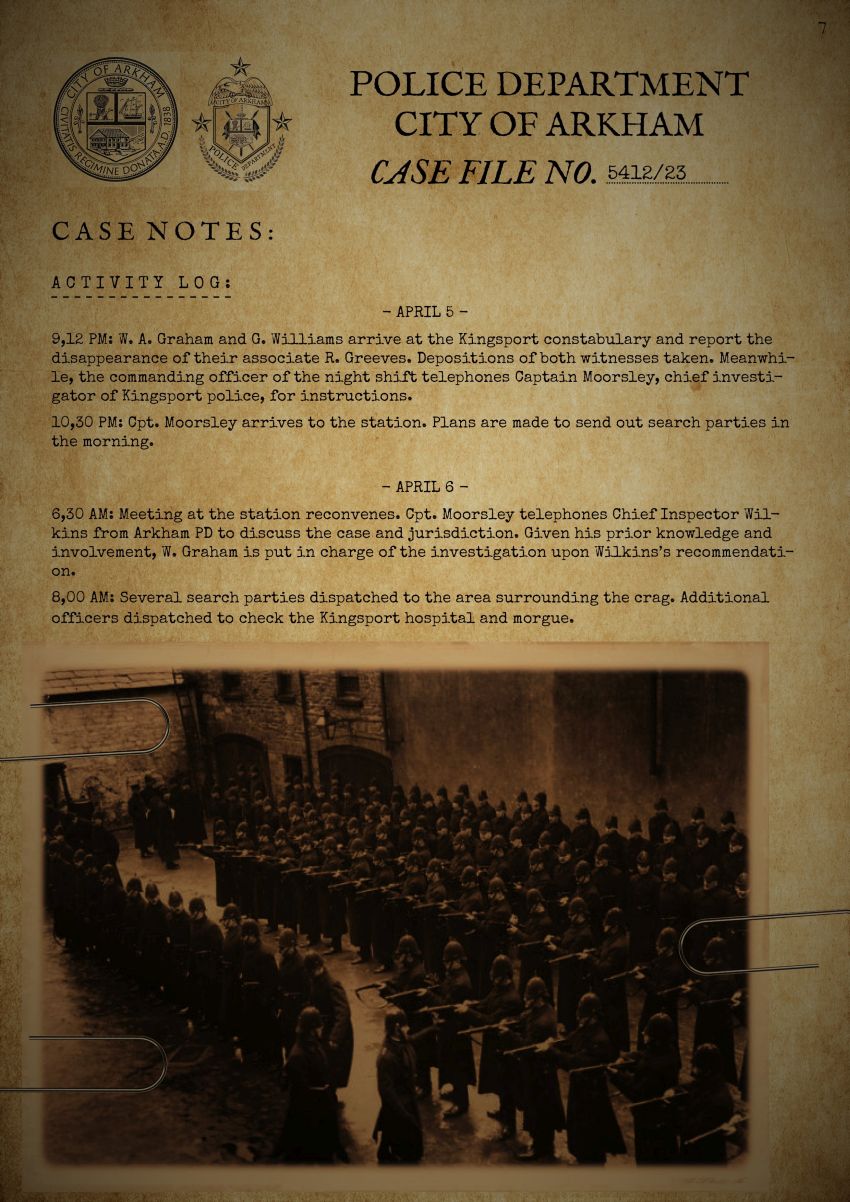 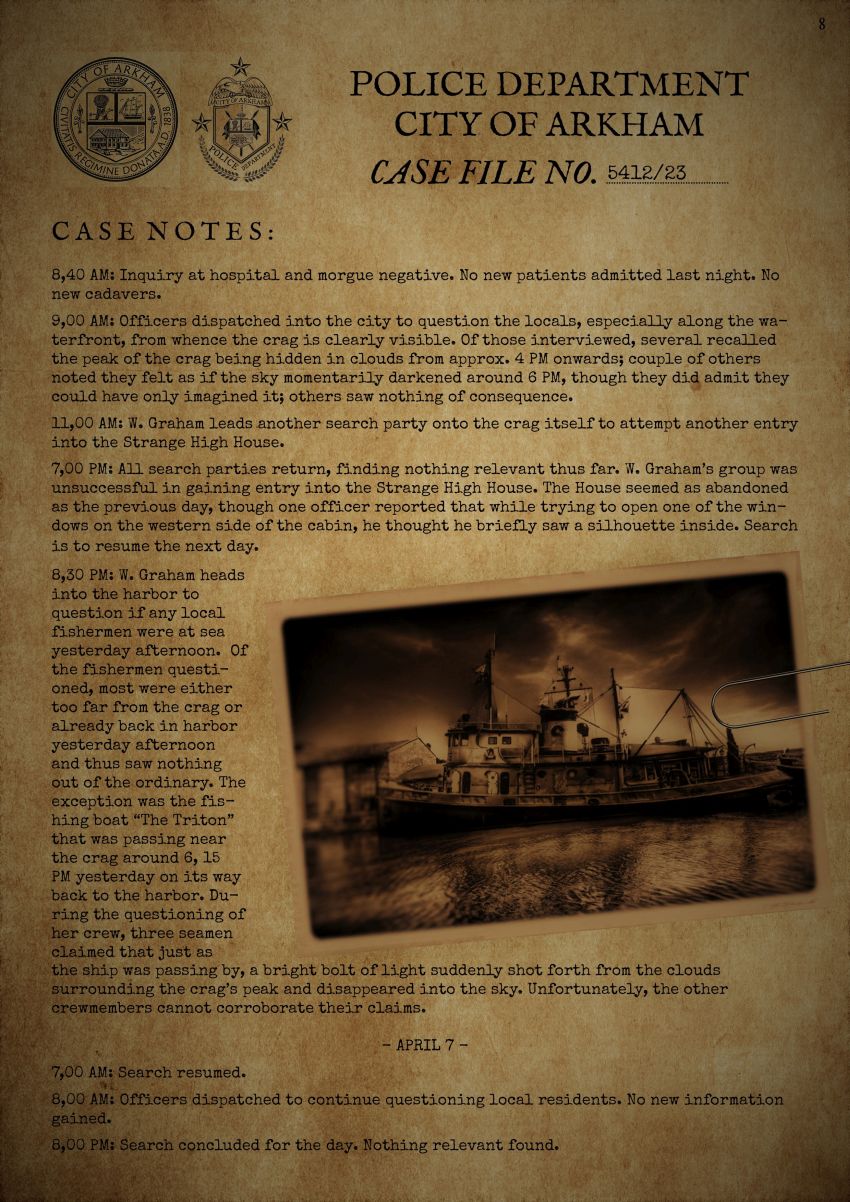 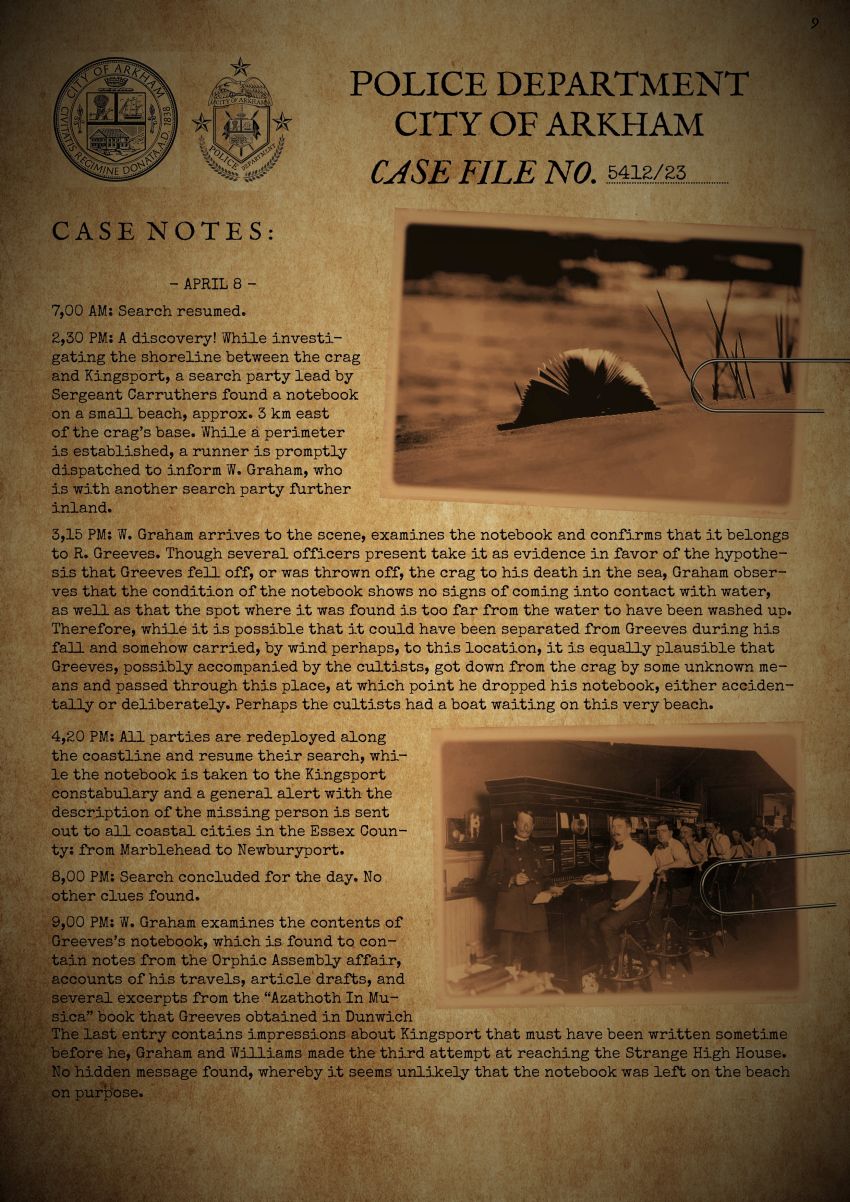 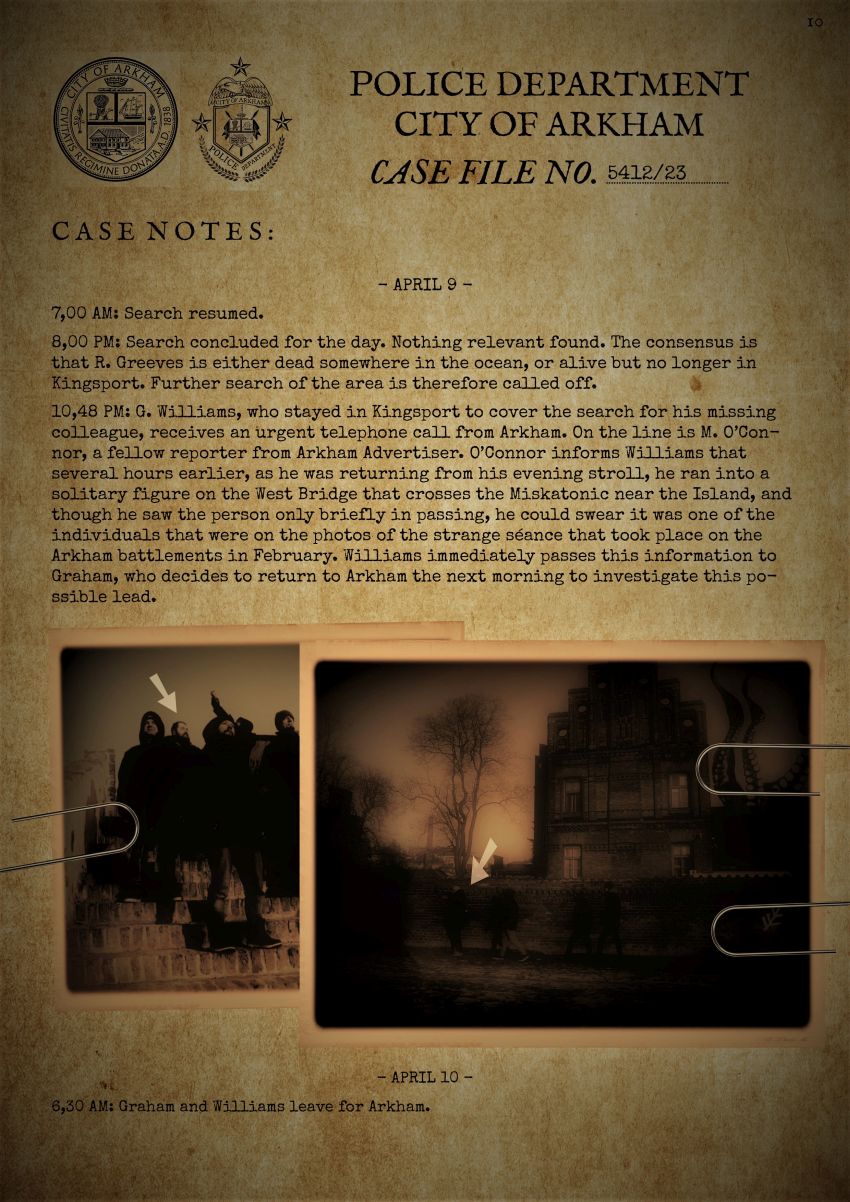 As usual, beside the original, we have here a transcript for an easier read:

Deposition of Walter A. Graham (conclusion)

Our first concern was to search the surroundings, which alas yielded nothing of consequence. The peak of the crag was utterly barren and quite narrow, thus easily examined, and yet, we found no evidence of anyone else’s presence beside our own. Still, the fact remains that R. Greeves did reach this place (as there was nowhere else to go) and that something was going on up here shortly before me and Williams arrived.

So, what happened to Greeves? Was he still alive? With the cult as guest or a prisoner? Or was he dead, thrown off the crag to the sea perhaps? And for that matter, if the cultists were here, where were they now? They could not have left the site the way we came, for they would have ran into us. Nor did it seem likely that they would somehow manage to climb down the Kingsport side of the crag, for it is so steep that any attempt at descent would require not only sophisticated climbing equipment, but also a great deal of time, so if they were climbing down, we would have seen them from where we were standing.

However, there was still the Strange High House, to which we now turned our attention. Since there was nothing and no one outside, it was certainly a possibility that whatever happened here transpired inside, which is where the cultist, possibly with Greeves, could now be hiding. The catch however was getting inside. There was no door in either of the three sides of the House that were accessible from land, only windows. We looked through, but saw no one inside, only a low room of black oak wainscots and carved Tudor furnishings. We did also see that the locals were correct, because for some unfathomable reason, the entrance door to the House was indeed on the oceanward side and therefore inaccessible from land.

That the House’s interior looked as derelict as the exterior lead us to speculate that there could be other rooms beneath the House, or perhaps even some underground passage that runs through the crag to some exit we were unaware of. Of course, we would not know for sure, unless we gained access and examined the place from within. That however we could not do. The windows were all sealed, and to our great bafflement, very much resistant to a forced entry. The glass would not break even when I fired my revolver to it.

We were at our wits end. For all intents and purposes, it seemed that R. Greeves and the cultists simply vanished into thin air, which I would immediately dismiss had I not been standing next to a House that defied reason. Then came a darker thought: what if there is nothing to find, because the cultists are also dead? What if that key moment in their grand design, so mentioned in their communication with Greeves, was in reality a mass suicide? What if all of them plummeted to their watery graves before Williams and I managed to climb up?

With sunset upon us and no answers, only questions and speculations, we decided the most prudent course of action was to return to Kingsport and assemble help. Thus, we began the arduous journey back and by the time we reached Kingsport, it was already night. We headed straight to the local police station.

9,12 PM: W. A. Graham and G. Williams arrive at the Kingsport constabulary and report the disappearance of their associate R. Greeves. Depositions of both witnesses taken. Meanwhile, the commanding officer of the night shift telephones Captain Moorsley, chief investigator of Kingsport police, for instructions.

10,30 PM: Cpt. Moorsley arrives to the station. Plans are made to send out search parties in the morning.

6,30 AM: Meeting at the station reconvenes. Cpt. Moorsley telephones Chief Inspector Wilkins from Arkham PD to discuss the case and jurisdiction. Given his prior knowledge and involvement, W. Graham is put in charge of the investigation upon Wilkins’s recommendation.

8,00 AM: Several search parties dispatched to the area surrounding the crag. Additional officers dispatched to check the Kingsport hospital and morgue.

8,40 AM: Inquiry at hospital and morgue negative. No new patients admitted last night. No new cadavers.

9,00 AM: Officers dispatched into the city to question the locals, especially along the waterfront, from whence the crag is clearly visible. Of those interviewed, several recalled the peak of the crag being hidden in clouds from approx. 4 PM onwards; couple of others noted they felt as if the sky momentarily darkened around 6 PM, though they did admit they could have only imagined it; others saw nothing of consequence.

11,00 AM: W. Graham leads another search party onto the crag itself to attempt another entry into the Strange High House.

7,00 PM: All search parties return, finding nothing relevant thus far. W. Graham’s group was unsuccessful in gaining entry into the Strange High House. The House seemed as abandoned as the previous day, though one officer reported that while trying to open one of the windows on the western side of the cabin, he thought he briefly saw a silhouette inside. Search is to resume the next day.

8,30 PM: W. Graham heads into the harbor to question if any local fishermen were at sea yesterday afternoon. Of the fishermen questioned, most were either too far from the crag or already back in harbor yesterday afternoon and thus saw nothing out of the ordinary. The exception was the fishing boat “The Triton” that was passing near the crag around 6, 15 PM yesterday on its way back to the harbor. During the questioning of her crew, three seamen claimed that just as the ship was passing by, a bright bolt of light suddenly shot forth from the clouds surrounding the crag’s peak and disappeared into the sky. Unfortunately, the other crewmembers cannot corroborate their claims

8,00 PM: Search concluded for the day. Nothing relevant found.

2,30 PM: A discovery! While investigating the shoreline between the crag and Kingsport, a search party lead by Sergeant Carruthers found a notebook on a small beach, approx. 3 km east of the crag’s base. While a perimeter is established, a runner is promptly dispatched to inform W. Graham, who is with another search party further inland.

3,15 PM: W. Graham arrives to the scene, examines the notebook and confirms that it belongs to R. Greeves. Though several officers present take it as evidence in favor of the hypothesis that Greeves fell off, or was thrown off, the crag to his death in the sea, Graham observes that the condition of the notebook shows no signs of coming into contact with water, as well as that the spot where it was found is too far from the water to have been washed up. Therefore, while it is possible that it could have been separated from Greeves during his fall and somehow carried, by wind perhaps, to this location, it is equally plausible that Greeves, possibly accompanied by the cultists, got down from the crag by some unknown means and passed through this place, at which point he dropped his notebook, either accidentally or deliberately. Perhaps the cultists had a boat waiting on this very beach.

4,20 PM: All parties are redeployed along the coastline and resume their search, while the notebook is taken to the Kingsport constabulary and a general alert with the description of the missing person is sent out to all coastal cities in the Essex County: from Marblehead to Newburyport.

8,00 PM: Search concluded for the day. No other clues found.

9,00 PM: W. Graham examines the contents of Greeves’s notebook, which is found to contain notes from the Orphic Assembly affair, accounts of his travels, article drafts, and several excerpts from the “Azathoth In Musica” book that Greeves obtained in Dunwich. The last entry contains impressions about Kingsport that must have been written sometime before he, Graham and Williams made the third attempt at reaching the Strange High House. No hidden message found, whereby it seems unlikely that the notebook was left on the beach on purpose.

8,00 PM: Search concluded for the day. Nothing relevant found. The consensus is that R. Greeves is either dead somewhere in the ocean, or alive but no longer in Kingsport. Further search of the area is therefore called off.

10,48 PM: G. Williams, who stayed in Kingsport to cover the search for his missing colleague, receives an urgent telephone call from Arkham. On the line is M. O’Connor, a fellow reporter from Arkham Advertiser. O’Connor informs Williams that several hours earlier, as he was returning from his evening stroll, he ran into a solitary figure on the West Bridge that crosses the Miskatonic near the Island, and though he saw the person only briefly in passing, he could swear it was one of the individuals that were on the photos of the strange séance that took place on the Arkham battlements in February. Williams immediately passes this information to Graham, who decides to return to Arkham the next morning to investigate this possible lead.

6,30 AM: Graham and Williams leave for Arkham.

Enjoy and TO BE CONTINUED!