Dear friends, do you remember our Lovecraftian tale pertaining to the upcoming album "MANTA" by Postcards from Arkham? Do you recall Roger J. Greeves, his trailing of the enigmatic cult named the Orphic Assembly of Manta Primordialis, and his disappearance in Kingsport? If yes, and you are curious what happened next, good news - the sequel is here!

Since we also have been curious, what the investigation of the disappearance of our protagonist revealed, we ventured ourselves to New England, hoping to get our hands on any relevant clues. We were nor very successful in the offices of Arkham Advertiser, but then we managed to gain access to the archive of Arkham Police Department, where we did find a file from precisely the investigation of Greeves's disappearance. Here is its first part: 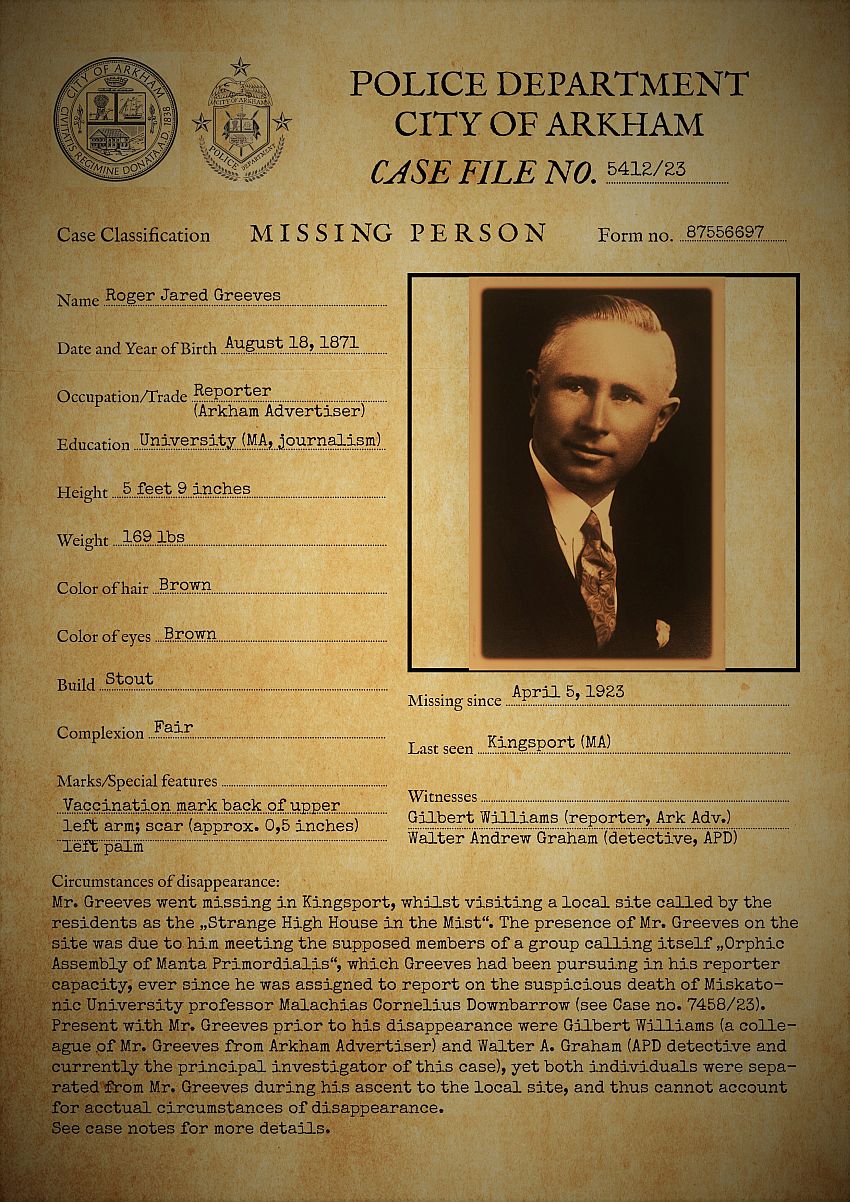 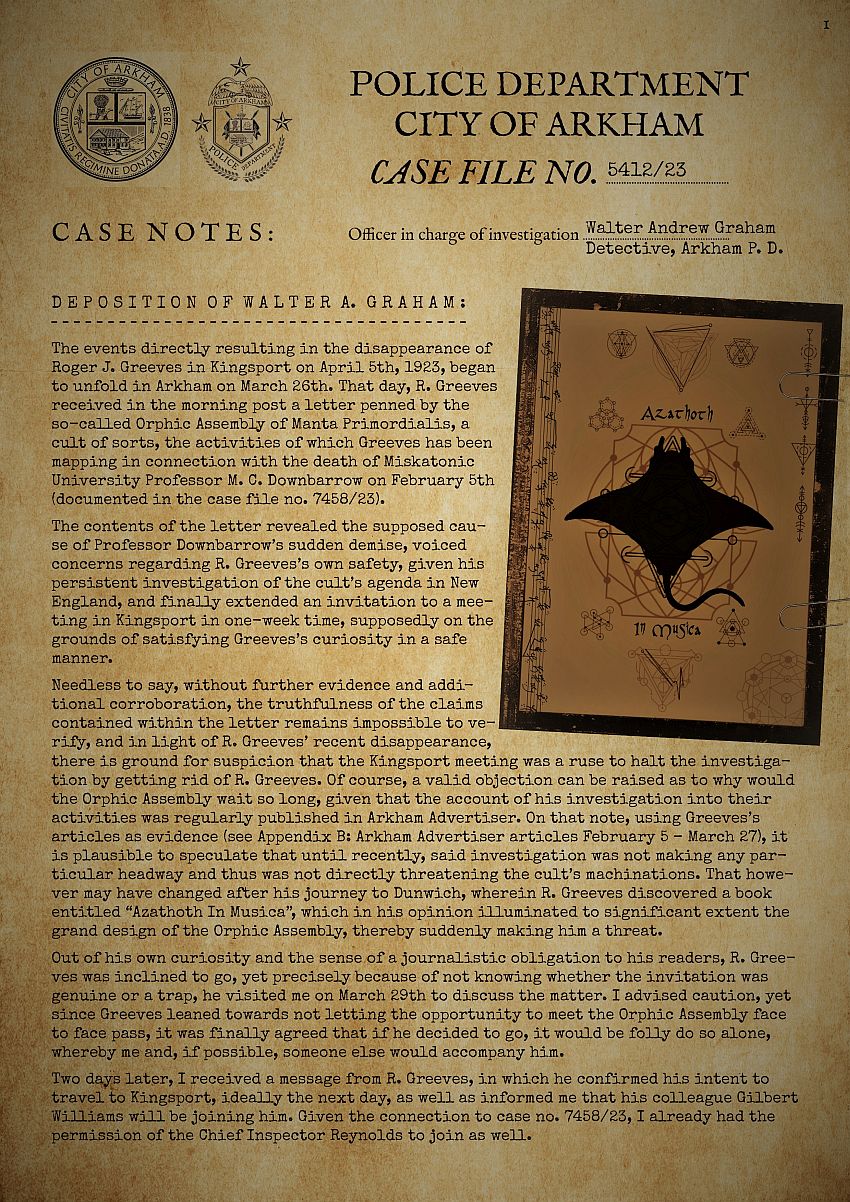 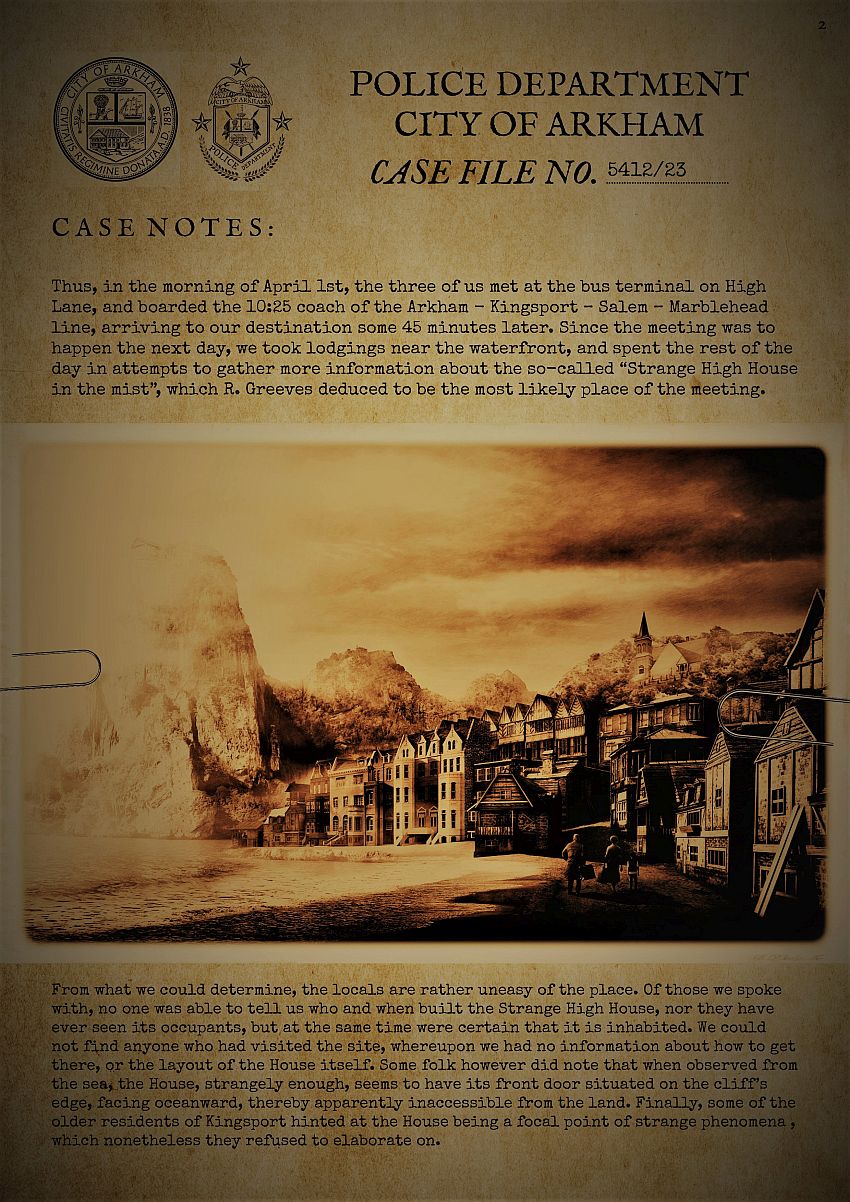 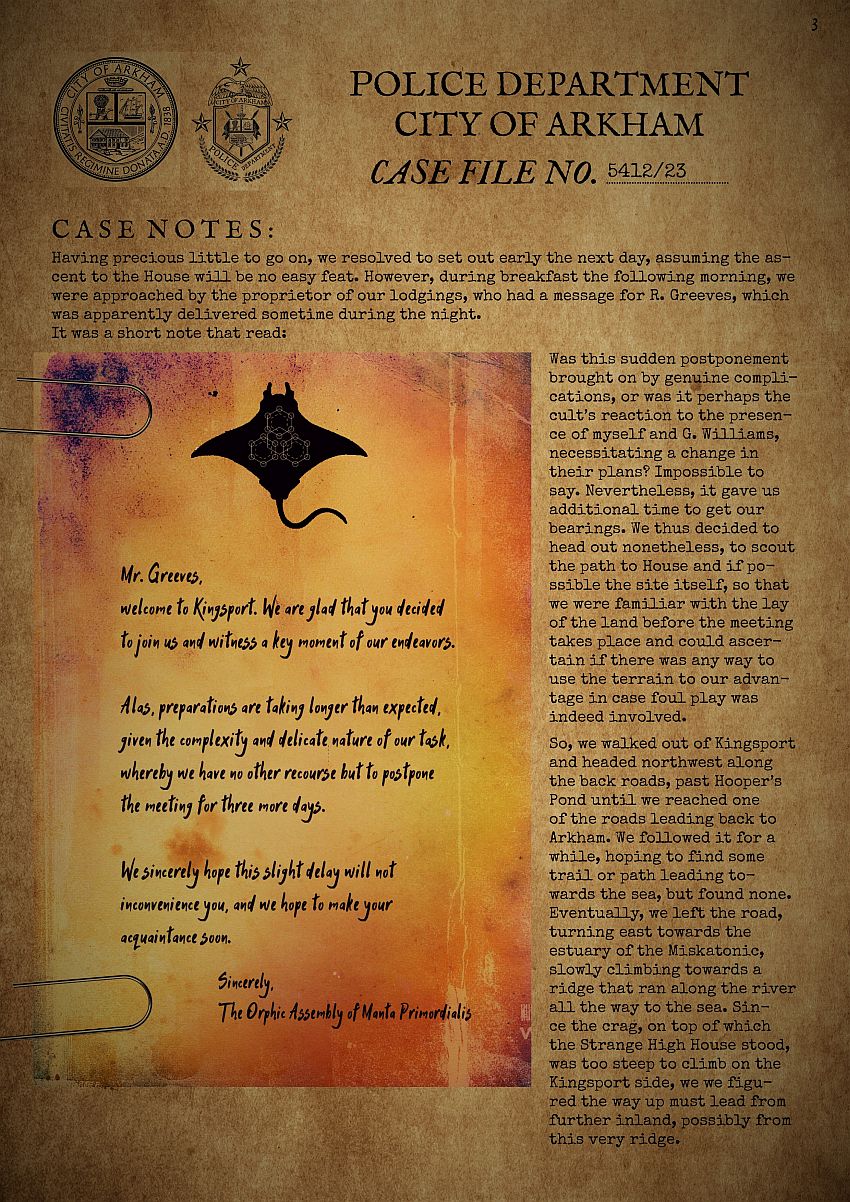 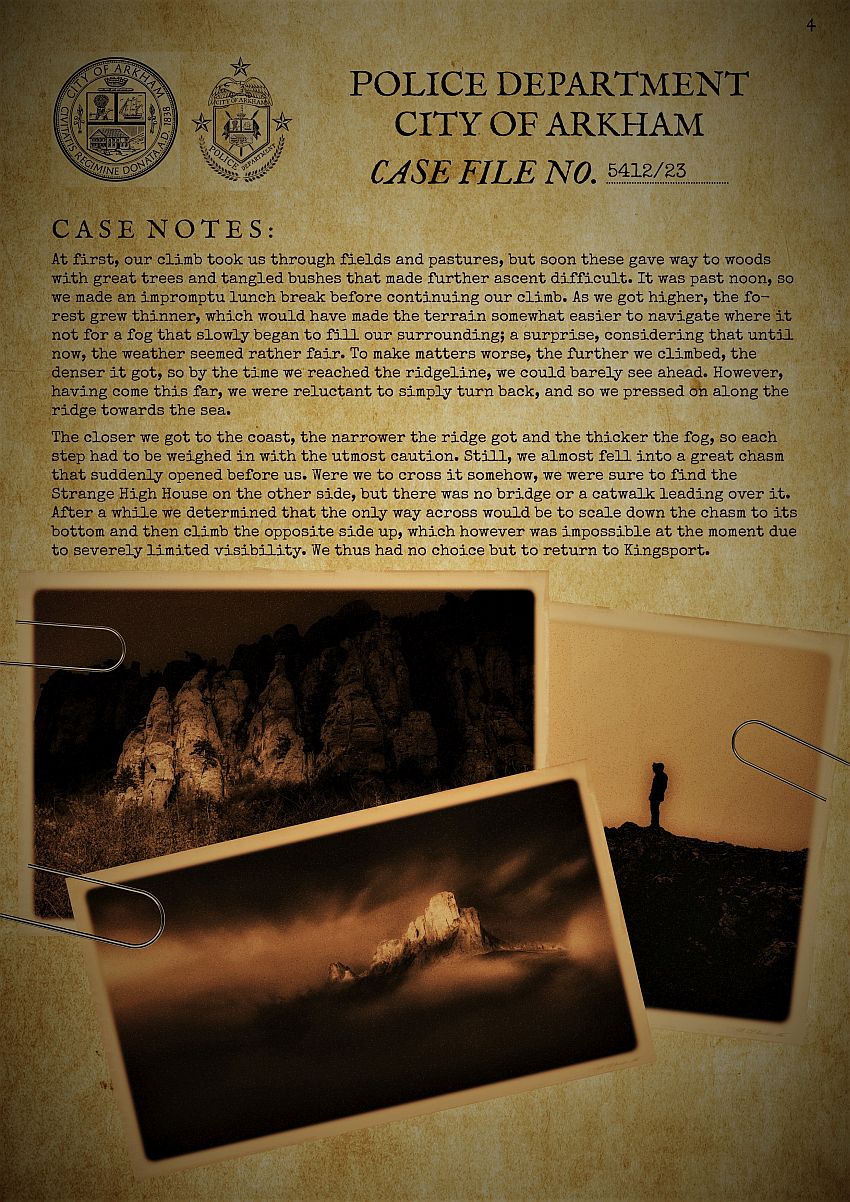 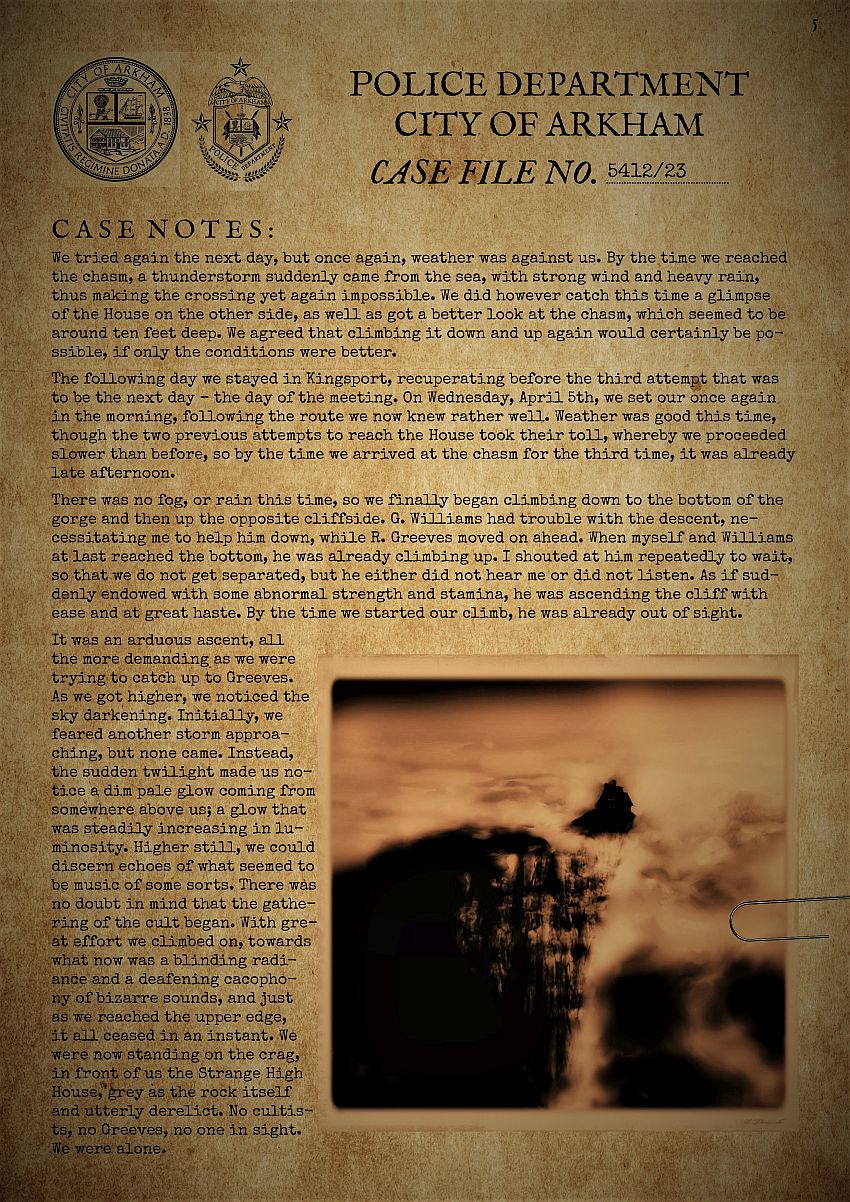 Of course, here is a transcript for an easier read:

Deposition of Walter A. Graham

The events directly resulting in the disappearance of Roger J. Greeves in Kingsport on April 5th, 1923, began to unfold in Arkham on March 26th. That day, R. Greeves received in the morning post a letter penned by the so-called Orphic Assembly of Manta Primordialis, a cult of sorts, the activities of which Greeves has been mapping in connection with the death of Miskatonic University Professor M. C. Downbarrow on February 5th (documented in the case file no. 7458/23).

The contents of the letter revealed the supposed cause of Professor Downbarrow’s sudden demise, voiced concerns regarding R. Greeves’s own safety, given his persistent investigation of the cult’s agenda in New England, and finally extended an invitation to a meeting in Kingsport in one-week time, supposedly on the grounds of satisfying Greeves’s curiosity in a safe manner.

Needless to say, without further evidence and additional corroboration, the truthfulness of the claims contained within the letter remains impossible to verify, and in light of R. Greeves’ recent disappearance, there is ground for suspicion that the Kingsport meeting was a ruse to halt the investigation by getting rid of R. Greeves. Of course, a valid objection can be raised as to why would the Orphic Assembly wait so long, given that the account of his investigation into their activities was regularly published in Arkham Advertiser. On that note, using Greeves’s articles as evidence (see Appendix B: Arkham Advertiser articles February 5 – March 27), it is plausible to speculate that until recently, said investigation was not making any particular headway and thus was not directly threatening the cult’s machinations. That however may have changed after his journey to Dunwich, wherein R. Greeves discovered a book entitled Azathoth In Musica, which in his opinion illuminated to significant extent the grand design of the Orphic Assembly, thereby suddenly making him a threat.

Out of his own curiosity and the sense of a journalistic obligation to his readers, R. Greeves was inclined to go, yet precisely because of not knowing whether the invitation was genuine or a trap, he visited me on March 29th to discuss the matter. I advised caution, yet since Greeves leaned towards not letting the opportunity to meet the Orphic Assembly face to face pass, it was finally agreed that if he decided to go, it would be folly do so alone, whereby me and, if possible, someone else would accompany him.

Two days later, I received a message from R. Greeves, in which he confirmed his intent to travel to Kingsport, ideally the next day, as well as informed me that his colleague Gilbert Williams will be joining him. Given the connection to case no. 7458/23, I already had the permission of the Chief Inspector Reynolds to join as well.

Thus, in the morning of April 1st, the three of us met at the bus terminal on High Lane, and boarded the 10:25 coach of the Arkham – Kingsport – Salem – Marblehead line, arriving to our destination some 45 minutes later. Since the meeting was to happen the next day, we took lodgings near the waterfront, and spent the rest of the day in attempts to gather more information about the so-called “Strange High House in the mist”, which R. Greeves deduced to be the most likely place of the meeting.

From what we could determine, the locals are rather uneasy of the place. Of those we spoke with, no one was able to tell us who and when built the Strange High House, nor they have ever seen its occupants, but at the same time were certain that it is inhabited. We could not find anyone who had visited the site, whereupon we had no information about how to get there, or the layout of the House itself. Some folk however did note that when observed from the sea, the House, strangely enough, seems to have its front door situated on the cliff’s edge, facing oceanward, thereby apparently inaccessible from the land. Finally, some of the older residents of Kingsport hinted at the House being a focal point of strange phenomena, which nonetheless they refused to elaborate on.

Having precious little to go on, we resolved to set out early the next day, assuming the ascent to the House will be no easy feat. However, during breakfast the following morning, we were approached by the proprietor of our lodgings, who had a message for R. Greeves, which was apparently delivered sometime during the night. It was a short note that read:

“Mr. Greeves, welcome to Kingsport. We are glad that you decided to join us and witness a key moment of our endeavors. Alas, preparations are taking longer than expected, given the complexity and delicate nature of our task, whereby we have no other recourse but to postpone the meeting for three more days. We sincerely hope this slight delay will not inconvenience you, and we hope to make your acquaintance soon. Sincerely, the Orphic Assembly of Manta Primordialis”

Was this sudden postponement brought on by genuine complications, or was it perhaps the cult’s reaction to the presence of myself and G. Williams, necessitating a change in their plans? Impossible to say. Nevertheless, it gave us additional time to get our bearings. We thus decided to head out nonetheless, to scout the path to House and if possible the site itself, so that we were familiar with the lay of the land before the meeting takes place and could ascertain if there was any way to use the terrain to our advantage in case foul play was indeed involved.

So, we walked out of Kingsport and headed northwest along the back roads, past Hooper’s Pond until we reached one of the roads leading back to Arkham. We followed it for a while, hoping to find some trail or path leading towards the sea, but found none. Eventually, we left the road, turning east towards the estuary of the Miskatonic, slowly climbing towards a ridge that ran along the river all the way to the sea. Since the crag, on top of which the Strange High House stood, was too steep to climb on the Kingsport side, we figured the way up must lead from further inland, possibly from this very ridge.

At first, our climb took us through fields and pastures, but soon these gave way to woods with great trees and tangled bushes that made further ascent difficult. It was past noon, so we made an impromptu lunch break before continuing our climb. As we got higher, the forest grew thinner, which would have made the terrain somewhat easier to navigate where it not for a fog that slowly began to fill our surrounding; a surprise, considering that until now, the weather seemed rather fair. To make matters worse, the further we climbed, the denser it got, so by the time we reached the ridgeline, we could barely see ahead. However, having come this far, we were reluctant to simply turn back, and so we pressed on along the ridge towards the sea.

The closer we got to the coast, the narrower the ridge got and the thicker the fog, so each step had to be weighed in with the utmost caution. Still, we almost fell into a great chasm that suddenly opened before us. Were we to cross it somehow, we were sure to find the Strange High House on the other side, but there was no bridge or a catwalk leading over it. After a while we determined that the only way across would be to scale down the chasm to its bottom and then climb the opposite side up, which however was impossible at the moment due to severely limited visibility. We thus had no choice but to return to Kingsport.

We tried again the next day, but once again, weather was against us. By the time we reached the chasm, a thunderstorm suddenly came from the sea, with strong wind and heavy rain, thus making the crossing yet again impossible. We did however catch this time a glimpse of the House on the other side, as well as got a better look at the chasm, which seemed to be around ten feet deep. We agreed that climbing it down and up again would certainly be possible, if only the conditions were better.

The following day we stayed in Kingsport, recuperating before the third attempt that was to be the next day – the day of the meeting. On Wednesday, April 5th, we set our once again in the morning, following the route we now knew rather well. Weather was good this time, though the two previous attempts to reach the House took their toll, whereby we proceeded slower than before, so by the time we arrived at the chasm for the third time, it was already late afternoon.

There was no fog, or rain this time, so we finally began climbing down to the bottom of the gorge and then up the opposite cliffside. G. Williams had trouble with the descent, necessitating me to help him down, while R. Greeves moved on ahead. When myself and Williams at last reached the bottom, he was already climbing up. I shouted at him repeatedly to wait, so that we do not get separated, but he either did not hear me or did not listen. As if suddenly endowed with some abnormal strength and stamina, he was ascending the cliff with ease and at great haste. By the time we started our climb, he was already out of sight.

It was an arduous ascent, all the more demanding as we were trying to catch up to Greeves. As we got higher, we noticed the sky darkening. Initially, we feared another storm approaching, but none came. Instead, the sudden twilight made us notice a dim pale glow coming from somewhere above us; a glow that was steadily increasing in luminosity. Higher still, we could discern echoes of what seemed to be music of some sorts. There was no doubt in mind that the gathering of the cult began. With great effort we climbed on, towards what now was a blinding radiance and a deafening cacophony of bizarre sounds, and just as we reached the upper edge, it all ceased in an instant. We were now standing on the crag, in front of us the Strange High House, grey as the rock itself and utterly derelict. No cultists, no Greeves, no one in sight. We were alone.

Enjoy and TO BE CONTINUED!