Good evening friends, not even this new week would we deny you the next chapter of our coverage, or rather of our Lovecraftian tale, related to the upcoming new album "MANTA" of the Czech post-rock project Postcards from Arkham.

Last time you visited with Roger J. Greeves one of the iconic places of Lovecraft's weird universe - Innsmouth. Today, we bring you another intermezzo, wherein you can however learn what happened next and how shall RJG proceed in his investigation.

JAs usual, we have here the original article from Arkham Advertiser, dated March 6, 1923: 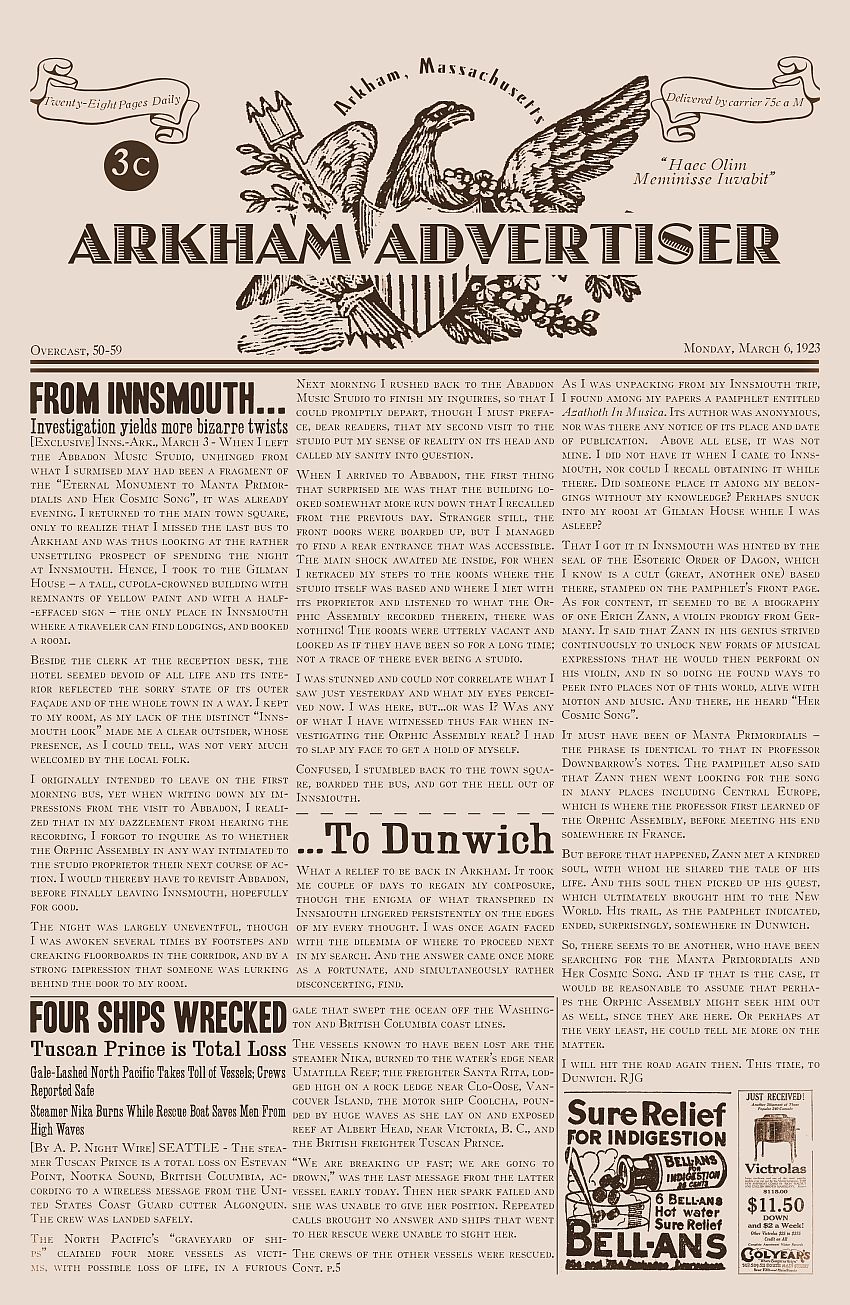 As well as the transcript of the text for an easier read. Have a weird one!

When I left the Abbadon Music Studio, unhinged from what I surmised may had been a fragment of the “Eternal Monument to Manta Primordialis and Her Cosmic Song”, it was already evening. I returned to the main town square, only to realize that I missed the last bus to Arkham and was thus looking at the rather unsettling prospect of spending the night at Innsmouth. Hence, I took to the Gilman House – a tall, cupola-crowned building with remnants of yellow paint and with a half-effaced sign – the only place in Innsmouth where a traveler can find lodgings, and booked a room.

Beside the clerk at the reception desk, the hotel seemed devoid of all life and its interior reflected the sorry state of its outer façade and of the whole town in a way. I kept to my room, as my lack of the distinct “Innsmouth look” made me a clear outsider, whose presence, as I could tell, was not very much welcomed by the local folk.

I originally intended to leave on the first morning bus, yet when writing down my impressions from the visit to Abbadon, I realized that in my dazzlement from hearing the recording, I forgot to inquire as to whether the Orphic Assembly in any way intimated to the studio proprietor their next course of action. I would thereby have to revisit Abbadon, before finally leaving Innsmouth, hopefully for good.

The night was largely uneventful, though I was awoken several times by footsteps and creaking floorboards in the corridor, and by a strong impression that someone was lurking behind the door to my room.

Next morning I rushed back to the Abaddon Music Studio to finish my inquiries, so that I could promptly depart, though I must preface, dear readers, that my second visit to the studio put my sense of reality on its head and called my sanity into question.

When I arrived to Abbadon, the first thing that surprised me was that the building looked somewhat more run down that I recalled from the previous day. Stranger still, the front doors were boarded up, but I managed to find a rear entrance that was accessible. The main shock awaited me inside, for when I retraced my steps to the rooms where the studio itself was based and where I met with its proprietor and listened to what the Orphic Assembly recorded therein, there was nothing! The rooms were utterly vacant and looked as if they have been so for a long time; not a trace of there ever being a studio.

I was stunned and could not correlate what I saw just yesterday and what my eyes perceived now. I was here, but…or was I? Was any of what I have witnessed thus far when investigating the Orphic Assembly real? I had to slap my face to get a hold of myself.

Confused, I stumbled back to the town square, boarded the bus, and got the hell out of Innsmouth.

What a relief to be back in Arkham. It took me couple of days to regain my composure, though the enigma of what transpired in Innsmouth lingered persistently on the edges of my every thought. I was once again faced with the dilemma of where to proceed next in my search. And the answer came once more as a fortunate, and simultaneously rather disconcerting, find.

As I was unpacking from my Innsmouth trip, I found among my papers a pamphlet entitled “Azathoth In Musica”. Its author was anonymous, nor was there any notice of its place and date of publication. Above all else, it was not mine. I did not have it when I came to Innsmouth, nor could I recall obtaining it while there. Did someone place it among my belongings without my knowledge? Perhaps snuck into my room at Gilman House while I was asleep?

That I got it in Innsmouth was hinted by the seal of the Esoteric Order of Dagon, which I know is a cult (great, another one) based there, stamped on the pamphlet’s front page. As for content, it seemed to be a biography of one Erich Zann, a violin prodigy from Germany. It said that Zann in his genius strived continuously to unlock new forms of musical expressions that he would then perform on his violin, and in so doing he found ways to peer into places not of this world, alive with motion and music. And there, he heard “Her Cosmic Song”.

It must have been of Manta Primordialis – the phrase is identical to that in professor Downbarrow’s notes. The pamphlet also said that Zann then went looking for the song in many places including Central Europe, which is where the professor first learned of the Orphic Assembly, before meeting his end somewhere in France.

But before that happened, Zann met a kindred soul, with whom he shared the tale of his life. And this soul then picked up his quest, which ultimately brought him to the New World. His trail, as the pamphlet indicated, ended, surprisingly, somewhere in Dunwich.

So, there seems to be another, who have been searching for the Manta Primordialis and Her Cosmic Song. And if that is the case, it would be reasonable to assume that perhaps the Orphic Assembly might seek him out as well, since they are here. Or perhaps at the very least, he could tell me more on the matter.

I will hit the road again then. This time, to Dunwich. RJG