Good afternoon dear friends, how about another installment of our Lovecraftian tale, related to the upcoming new album "MANTA" by the Czech post-rock project Postcards from Arkham?

Last time you witnessed a weird séance on Arkham battlements. Today's chapter is something of an intermezzo that nonetheless determines the future heading of the plot. Thus, join once again Roger J. Greeves and discover where his investigation of OAMP will take him next.

As usual, we bring you the original article as printed in Arkham Advertiser: 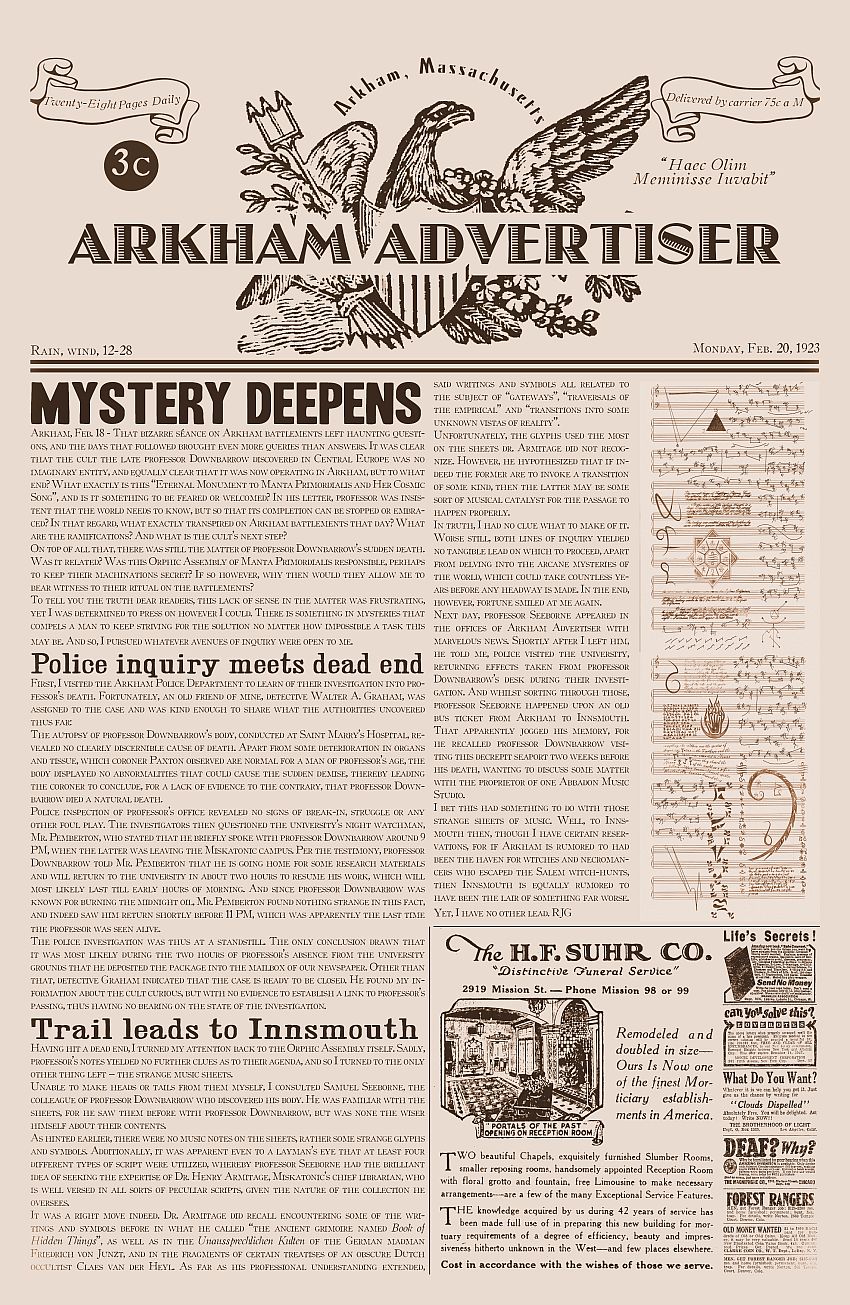 As well as the transcript of the text for an easier read:

That bizarre séance on Arkham battlements left haunting questions, and the days that followed brought even more queries than answers. It was clear that the cult the late professor Downbarrow discovered in Central Europe was no imaginary entity, and equally clear that it was now operating in Arkham, but to what end? What exactly is this “Eternal Monument to Manta Primordialis and Her Cosmic Song”, and is it something to be feared or welcomed? In his letter, professor was insistent that the world needs to know, but so that its completion can be stopped or embraced? In that regard, what exactly transpired on Arkham battlements that day? What are the ramifications? And what is the cult’s next step?

On top of all that, there was still the matter of professor Downbarrow’s sudden death. Was it related? Was this Orphic Assembly of Manta Primordialis responsible, perhaps to keep their machinations secret? If so however, why then would they allow me to bear witness to their ritual on the battlements?

To tell you the truth dear readers, this lack of sense in the matter was frustrating, yet I was determined to press on however I could. There is something in mysteries that compels a man to keep striving for the solution no matter how impossible a task this may be. And so, I pursued whatever avenues of inquiry were open to me.

First, I visited the Arkham Police Department to learn of their investigation into professor’s death. Fortunately, an old friend of mine, detective Walter A. Graham, was assigned to the case and was kind enough to share what the authorities uncovered thus far:

The autopsy of professor Downbarrow’s body, conducted at Saint Marry’s Hospital, revealed no clearly discernible cause of death. Apart from some deterioration in organs and tissue, which coroner Paxton observed are normal for a man of professor’s age, the body displayed no abnormalities that could cause the sudden demise, thereby leading the coroner to conclude, for a lack of evidence to the contrary, that professor Downbarrow died a natural death.

Police inspection of professor’s office revealed no signs of break-in, struggle or any other foul play. The investigators then questioned the university’s night watchman, Mr. Pemberton, who stated that he briefly spoke with professor Downbarrow around 9 PM, when the latter was leaving the Miskatonic campus. Per the testimony, professor Downbarrow told Mr. Pemberton that he is going home for some research materials and will return to the university in about two hours to resume his work, which will most likely last till early hours of morning. And since professor Downbarrow was known for burning the midnight oil, Mr. Pemberton found nothing strange in this fact, and indeed saw him return shortly before 11 PM, which was apparently the last time the professor was seen alive.

The police investigation was thus at a standstill. The only conclusion drawn that it was most likely during the two hours of professor’s absence from the university grounds that he deposited the package into the mailbox of our newspaper. Other than that, detective Graham indicated that the case is ready to be closed. He found my information about the cult curious, but with no evidence to establish a link to professor’s passing, thus having no bearing on the state of the investigation.

Having hit a dead end, I turned my attention back to the Orphic Assembly itself. Sadly, professor’s notes yielded no further clues as to their agenda, and so I turned to the only other thing left – the strange music sheets.

Unable to make heads or tails from them myself, I consulted Samuel Seeborne, the colleague of professor Downbarrow who discovered his body. He was familiar with the sheets, for he saw them before with professor Downbarrow, but was none the wiser himself about their contents.

As hinted earlier, there were no music notes on the sheets, rather some strange glyphs and symbols. Additionally, it was apparent even to a layman’s eye that at least four different types of script were utilized, whereby professor Seeborne had the brilliant idea of seeking the expertise of Dr. Henry Armitage, Miskatonic’s chief librarian, who is well versed in all sorts of peculiar scripts, given the nature of the collection he oversees.

It was a right move indeed. Dr. Armitage did recall encountering some of the writings and symbols before in what he called “the ancient grimoire named Book of Hidden Things”, as well as in the Unaussprechlichen Kulten of the German madman Friedrich von Junzt, and in the fragments of certain treatises of an obscure Dutch occultist Claes van der Heyl. As far as his professional understanding extended, said writings and symbols all related to the subject of “gateways”, “traversals of the empirical” and “transitions into some unknown vistas of reality”.

Unfortunately, the glyphs used the most on the sheets dr. Armitage did not recognize. However, he hypothesized that if indeed the former are to invoke a transition of some kind, then the latter may be some sort of musical catalyst for the passage to happen properly.

In truth, I had no clue what to make of it. Worse still, both lines of inquiry yielded no tangible lead on which to proceed, apart from delving into the arcane mysteries of the world, which could take countless years before any headway is made. In the end, however, fortune smiled at me again.

Next day, professor Seeborne appeared in the offices of Arkham Advertiser with marvelous news. Shortly after I left him, he told me, police visited the university, returning effects taken from professor Downbarrow’s desk during their investigation. And whilst sorting through those, professor Seeborne happened upon an old bus ticket from Arkham to Innsmouth. That apparently jogged his memory, for he recalled professor Downbarrow visiting this decrepit seaport two weeks before his death, wanting to discuss some matter with the proprietor of one Abbadon Music Studio.

I bet this had something to do with those strange sheets of music. Well, to Innsmouth then, though I have certain reservations, for if Arkham is rumored to had been the haven for witches and necromancers who escaped the Salem witch-hunts, then Innsmouth is equally rumored to have been the lair of something far worse. Yet, I have no other lead. RJG