Dear friends, the first announcement regarding our label for this year is here! If you are following the Czech Lovecraftian post-rock project Postcards from Arkham, you may have noticed that PfA are amidst preparations of a new album entitled "MANTA", which, as its predecessor, shall be released by MetalGate Records in late summer 2017.

Thus, today begins our coverage pertaining to this album, though in a different form than usual. Since "MANTA", unlike "ÆØN5", shall draw more directly from the literary legacy of H. P. Lovecraft, our coverage shall likewise follow the spirit of HPL's masterful "weird fiction".

We thus crodially invite you to with the Cosmic horror permeated Arkham of 1923. On Feb. 6, the local newspaper Arkham Advertiser brought a stunning article about a sudden death in the ranks of the faculty of Miskatonic University, the investigation of which brought a reporter from said newspapers on the trail of a cult named "Orphic Assembly of Manta Primordialis". Here is a photo of the original issue: 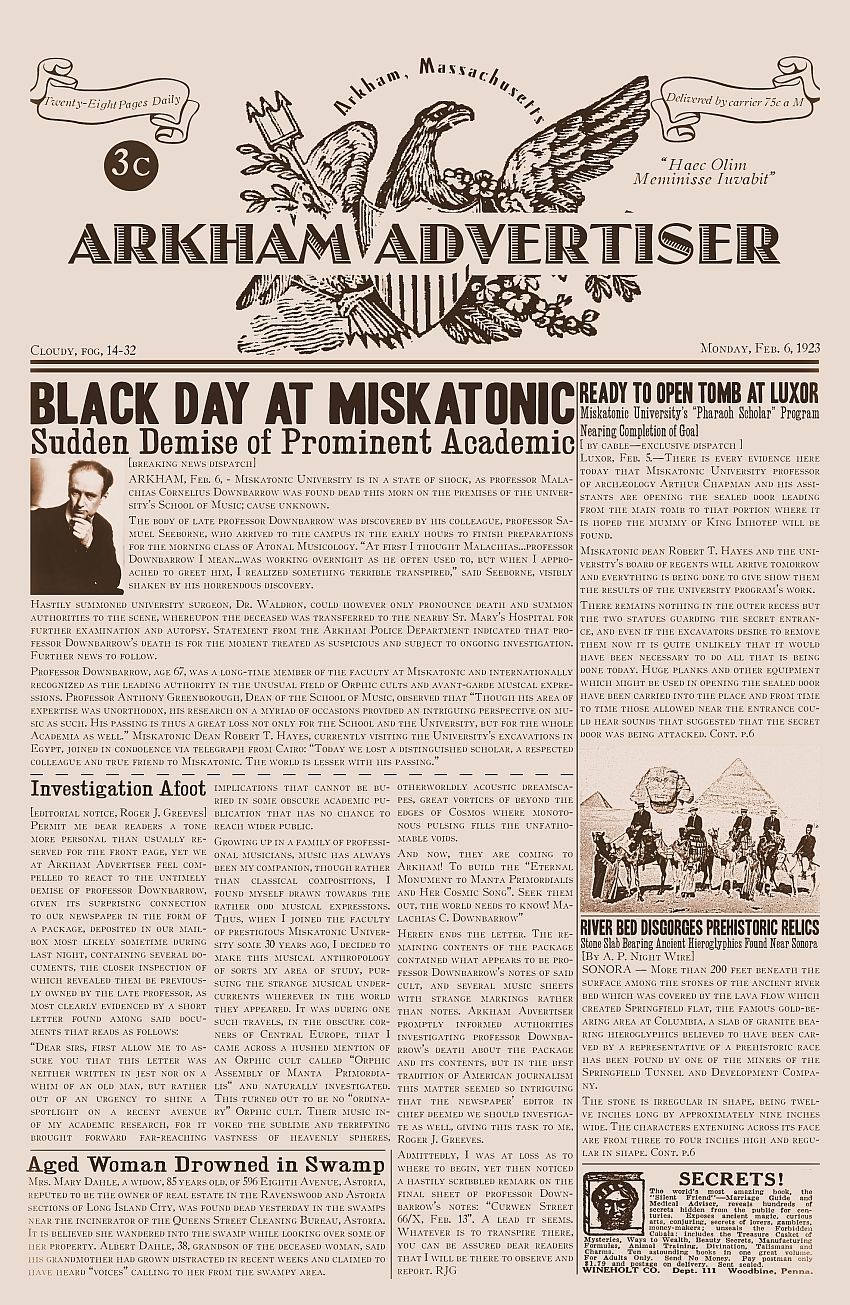 The article then reads as follows:

[breaking news dispatch] Arkham, Feb. 6, - Miskatonic University is in a state of shock, as professor Malachias Cornelius Downbarrow was found dead this morn on the premises of the university’s School of Music; cause unknown.

The body of late professor Downbarrow was discovered by his colleague, professor Samuel Seeborne, who arrived to the campus in the early hours to finish preparations for the morning class of Atonal Musicology. “At first I thought Malachias…professor Downbarrow I mean…was working overnight as he often used to, but when I approached to greet him, I realized something terrible transpired,” said Seeborne, visibly shaken by his horrendous discovery.

Hastily summoned university surgeon, Dr. Waldron, could however only pronounce death and summon authorities to the scene, whereupon the deceased was transferred to the nearby St. Mary’s Hospital for further examination and autopsy. Statement from the Arkham Police Department indicated that professor Downbarrow’s death is for the moment treated as suspicious and subject to ongoing investigation. Further news to follow.

Professor Downbarrow, age 67, was a long-time member of the faculty at Miskatonic and internationally recognized as the leading authority in the unusual field of Orphic cults and avant-garde musical expressions. Professor Anthony Greenborough, Dean of the School of Music, observed that “Though his area of expertise was unorthodox, his research on a myriad of occasions provided an intriguing perspective on music as such. His passing is thus a great loss not only for the School and the University, but for the whole Academia as well.” Miskatonic Dean Robert T. Hayes, currently visiting the University’s excavations in Egypt, joined in condolence via telegraph from Cairo: “Today we lost a distinguished scholar, a respected colleague and true friend to Miskatonic. The world is lesser with his passing.”

Permit me dear readers a tone more personal than usually reserved for the front page, yet we at Arkham Advertiser feel compelled to react to the untimely demise of professor Downbarrow, given its surprising connection to our newspaper in the form of a package, deposited in our mailbox most likely sometime during last night, containing several documents, the closer inspection of which revealed them be previously owned by the late professor, as most clearly evidenced by a short letter found among said documents that reads as follows:

“Dear sirs, first allow me to assure you that this letter was neither written in jest nor on a whim of an old man, but rather out of an urgency to shine a spotlight on a recent avenue of my academic research, for it brought forward far-reaching implications that cannot be buried in some obscure academic publication that has no chance to reach wider public.

Growing up in a family of professional musicians, music has always been my companion, though rather than classical compositions, I found myself drawn towards the rather odd musical expressions. Thus, when I joined the faculty of prestigious Miskatonic University some 30 years ago, I decided to make this musical anthropology of sorts my area of study, pursuing the strange musical undercurrents wherever in the world they appeared. It was during one such travels, in the obscure corners of Central Europe, that I came across a hushed mention of an Orphic cult called “Orphic Assembly of Manta Primordialis” and naturally investigated. This turned out to be no “ordinary” Orphic cult. Their music invoked the sublime and terrifying vastness of heavenly spheres, otherworldly acoustic dreamscapes, great vortices of beyond the edges of Cosmos where monotonous pulsing fills the unfathomable voids…

And now, they are coming to Arkham! To build the “Eternal Monument to Manta Primordialis and Her Cosmic Song”. Seek them out, the world needs to know! Malachias C. Downbarrow”

Herein ends the letter. The remaining contents of the package contained what appears to be professor Downbarrow’s notes of said cult, and several music sheets with strange markings rather than notes. Arkham Advertiser promptly informed authorities investigating professor Downbarrow’s death about the package and its contents, but in the best tradition of American journalism this matter seemed so intriguing that the newspaper’ editor in chief deemed we should investigate as well, giving this task to me, Roger J. Greeves.

Admittedly, I was at loss as to where to begin, yet then noticed a hastily scribbled remark on the final sheet of professor Downbarrow’s notes: “Curwen Street 66/X, Feb. 13”. A lead it seems. Whatever is to transpire there, you can be assured dear readers that I will be there to observe and report. RJG