The second studio album "Wareligion" of the thrash-death metal company ANTIGOD is officially out as a six-panel digipak with a trully stylish bonus, a band beer-mat! Order now on MetalGate e-shop. 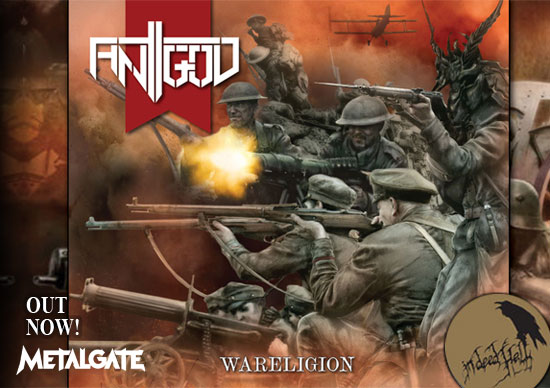 Shellshock! While in Czech Republic, we celebrate November 17, in the rest of the Western world the eleventh month is tied to another commemoration altogether – to the Veterans Day. Each year a silent army of red poppies in lapels floods the streets in remembrance of all the dead and wounded young men that fell victim to the trenches of World War One. And it is this conflict that lies at the heart of the new album of the thrash-death metal howitzer ANTIGOD from Northern Moravia, whose line-up was recently reinforced by the veteran warrior Chymus, otherwise known for his involvement in the unfortunately no lonegr existing band of perverts ISACAARUM.

The new album, entitled “Wareligion” has everything you like about ANTIGOD, that is, a killer combination of thrash and death metal with top notch sound and production from Šopa Studio, spiced with charm and irony that was missing precisely since ISACAARUM. “Wareligion” gets you like yperite and make no mistake; there is no quiet on the western front. The album is comprised of 13 blasts in the vein of old thrash with some death metal on top and with intermezzos invoking wartime marches. Lyrics-wise, Chymus wrestles with the psychological side of the war and with its terrible consequences. No more Verdun! The album art was skillfully executed by Jaromír “Deather” Bezruč, whose talent was utilized by many bands, including the iconic VITAL REMAINS.