Dear friends, our "talks" series, wherein we consider one title from our production or another from the standpoint of its author or authors, is back! Today, we are logically heading for a chat with Maestro Necrocock to debate nothing else but the recently published necroculinary opus "Necro Cook: Podivuhodná kuchařka Toma Necrococka & Houbové Marie". Enjoy! 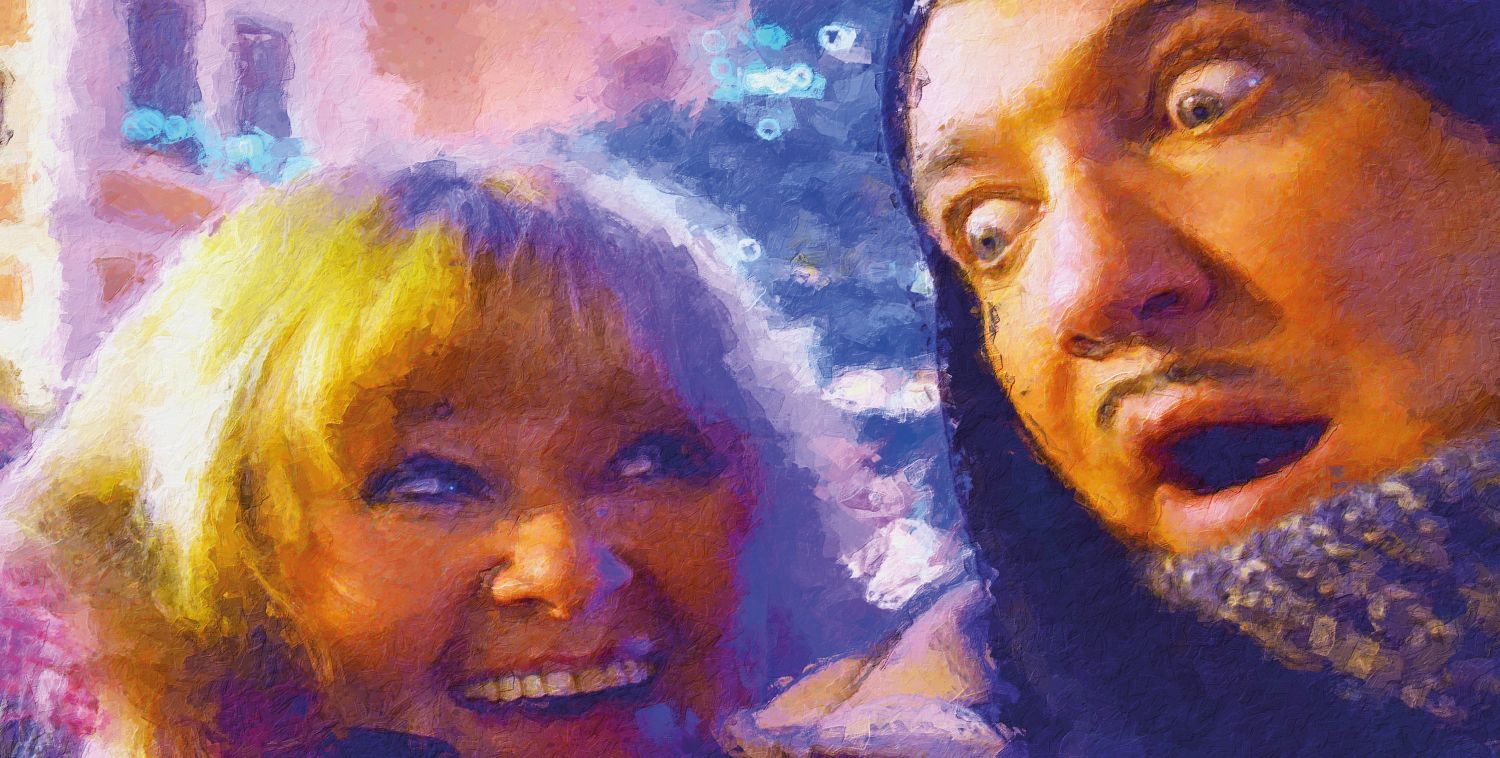 NECROCOCK: the miraculous cookbook of Necro Cook is a gorgeous gem

Necrocock is no doubt one of the most iconic individuals of the Czech metal scene. Oftentimes restless, always creating, thus supplying his fans with new recordings at a regular basis. This time however, he came with a surprise that is truly singular is his fruitful career – a book, but not just any book, a cookbook! Entitled Necro Cook: Podivuhodná kuchařka Toma Necrococka a Houbové Marie, it was published in late April by MetalGate Records.

A cookbook is a brand-new experience for you. How do you feel now that it is out at last?

I cannot put it into words. Thanks to our generous publisher, I have become a culinary writer and found out that I rather enjoy it. From our original idea to collect out favorite recipes into a notebook form our children and their children, we ultimately ended up with this gorgeous gem for the wider, well-disposed to us, public. In fact, we are now cooking according to our own book. Instead of opening the age-old, torn and burnt notebook to search for cut outs or poorly handwritten illegible recipes, we reach into our kitchen library for this beautiful red tome and revel in joy.

This year, you are celebrating the 30 years of being together with Houbová Marie, who is the co-author of the book. Is the cookbook then a sort of symbolic gift to your anniversary?

It was intended as such. Only as the book was being finished, we realized that we are having this notable anniversary, so it kind of became so only afterwards. Either way, I think there is no better gift we could have gone with. A book that celebrates three decades of joint love life, cooking, feasting and occasional music performing. The fate itself timed it perfectly for us.

It is a gift surely for fans as well. But is it just the gourmets that should be on the lookout for the cookbook, or can it interest anyone else too?

It is a must for all the worshipers of the Necrocockworld and all lovers of the Necrocockhumor. I reckon that the 48 unique recipes is in a way a supplement to all the food related stories, travel anecdotes, ways of curing my various ailments and various other remarks of mine that make up the chapter called Necrotlachy. So, those not really interested in cooking and in turn in our recipes will thus be entertained and informed by this part for sure. Maybe they will even become better human beings. Last but not least, the book also has included in it a CD with my appetizer album Tafelmusik (Das Vorgericht), which is intended to accompany feast or for better digestion whilst lying on a divan being stuffed to the utmost degree.

In the book you mention that it is intended first and foremost to young brides and housewives to be. Why should they pay the extra heed?

Because young girls these days do not have a very warm relationship with cooking. They cook mostly quick dishes, and even if they do make the effort, they still want to cheat it as much as possible. Nothing but ready-to-cook food, pasta, ketchup and other such hogwash… and when they conceive a child, it gets even worse. No salt, no spices, no chili, nothing has any taste, which then brings little harmony into a household. Guys take none of it and they often run back to their moms to have a decent lunch. Many times, such a situation leads to an early end. The book contains many quotes that provide food for thought. For what is a bad cook than a worthless member of the family, just wasting away money and domestic happiness. 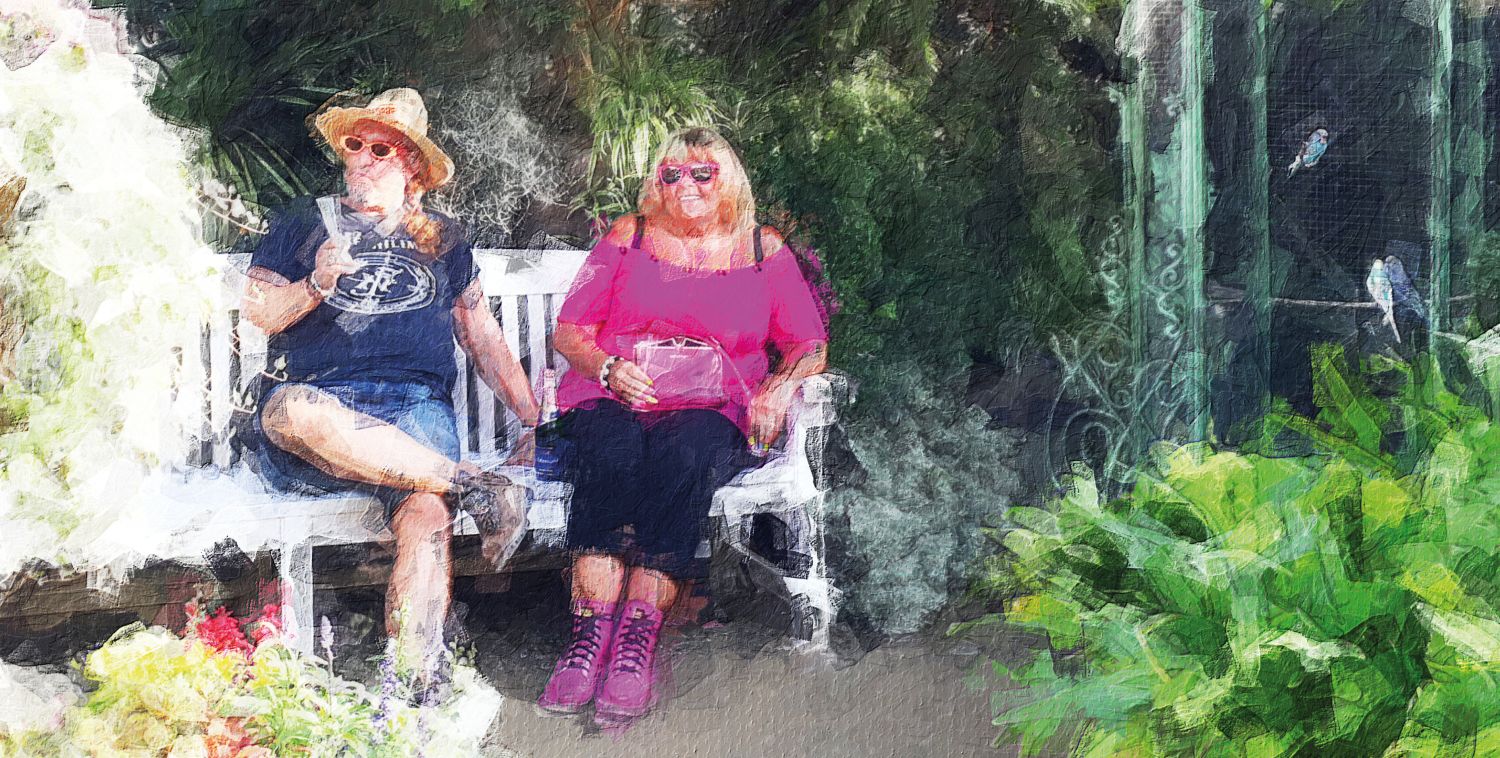 When it comes to cooking, are you spontaneous or plan days in advance?

Mainly spontaneous. We deal with it day by day according to momentary circumstances and tastes. Our cuisine is also seasonal, keeping to what harvest yields at a given time of the year. We for example truly enjoy spring young ducks, lambs, goatlings, asparagus, young herbs, making tea from nettles and meals from dandelions. In fact, what we shall cook is always determined by the calendar and the weather. We are not fools to go looking for lovage or dill in the middle of winter. On the other hand, we are staunch traditionalists, so for the occasion of different holidays, such as Easter, Pentecost or kermesse, we need to plan ahead to get all the meats and other ingredients, since everything needs to be ready to the day. No way around it.

I oftentimes read discussions as to which meal of the day is the most important one. What do you think?

I consider all of them important. I cannot brush off breakfast with some biscuit, croissant or just a cup of cappuccino like the Italians do. I need eggs (cooked differently each time) or sausages or some bratwursts… I do not like sweet breakfasts much. When it comes it to, I can skim through lunch and have only a hefty soup. I do not like to eat too much at lunchtime, as I want to be able to do something and to think clearly during the afternoon. When at home, I do not need a warm dinner. My most favorite option are various hams, serrano, iberico, cheeses, bacons, pancettas, tomatoes, salads, olives and most importantly wine. I must drink wine each evening. Of course, on my travels I feast a lot more to taste as much as I can, so my lunches and dinners usually have multiple courses.

Now that you mention it, since you travel a lot, I need to ask with destinations are in your opinion the gourmet paradise…

Asia of course; for me personally, Vietnam, where I tasted things I never before considered edible. In Europe it is probably Italy and Spain, though Hungary is also great, especially when it comes to entrails cuisine, tripe pörkölt or goulash from rooster testicles.

And the other way around… which cuisine is not really to your liking?

Probably the vegetarian one. I also pass on all the burgers and fries, as well as on bulgur, couscous, tofu, artichokes and red tomato dishes. 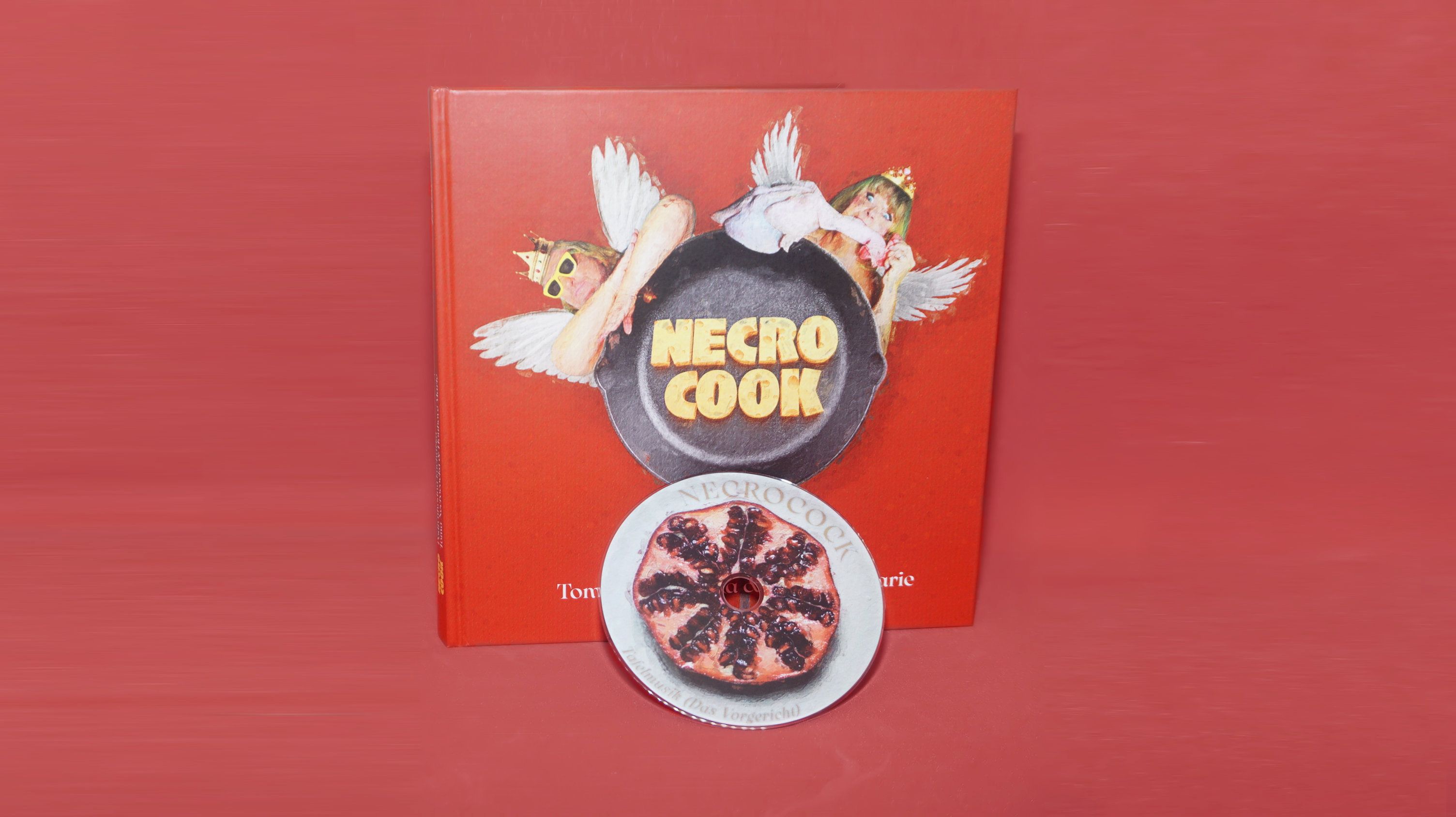 As you mentioned, the book has its very own soundtrack, which showcases your music in a somewhat different light than what fans are used to. Will that be the case as well of your next full-length?

Thematically yes, though besides the foreshadowed Baroque vein, it will be more diverse. This EP is first and foremost precisely a soundtrack to the book as such, whereby it corresponds to its atmosphere and visual execution. The grand Hauptgericht album that I plan to release on Christmas, shall have the signature Necrocock guitars, dark synths, but also evil rap as well as culinary folk songs. It will be very colorful and excellent as I can already say.

And what’s next for Necrocock?

Since a particular fan of mine sent me a load of stuffed water birds, and now he will follow up with various storks, peacock and owls, and I really have no space left where to put all of that, I need to build on my garden some small ornithological pavilion; a necroaviary of sorts.

Will the cookbook be a singular volume, or do you suspect a sequel will come eventually?

I would love to pen the next one. It was fun and there is still much to tell. Experiences keep coming, so it is necessary to write them down lest we forget. If our publisher is still interested and gives us the green light, we will happily get on with it.

Summer is coming, and since you are a passionate traveler, have you already planned with parts of the Czech Republic to visit?

Before the season kicks in, I will be heading to Moravia, to where the force lines of the past and the future intersect. Other than that, I have no special plans. Truth be told, I do not travel much around Czechia as of late during summer. After covid, everything is infested with swarms of tourists, dominated by either douchebags or noisy families with their ill-behaving spawn. I rather retreat somewhere south to thermal spa, and enjoy the company of the quiet elders. 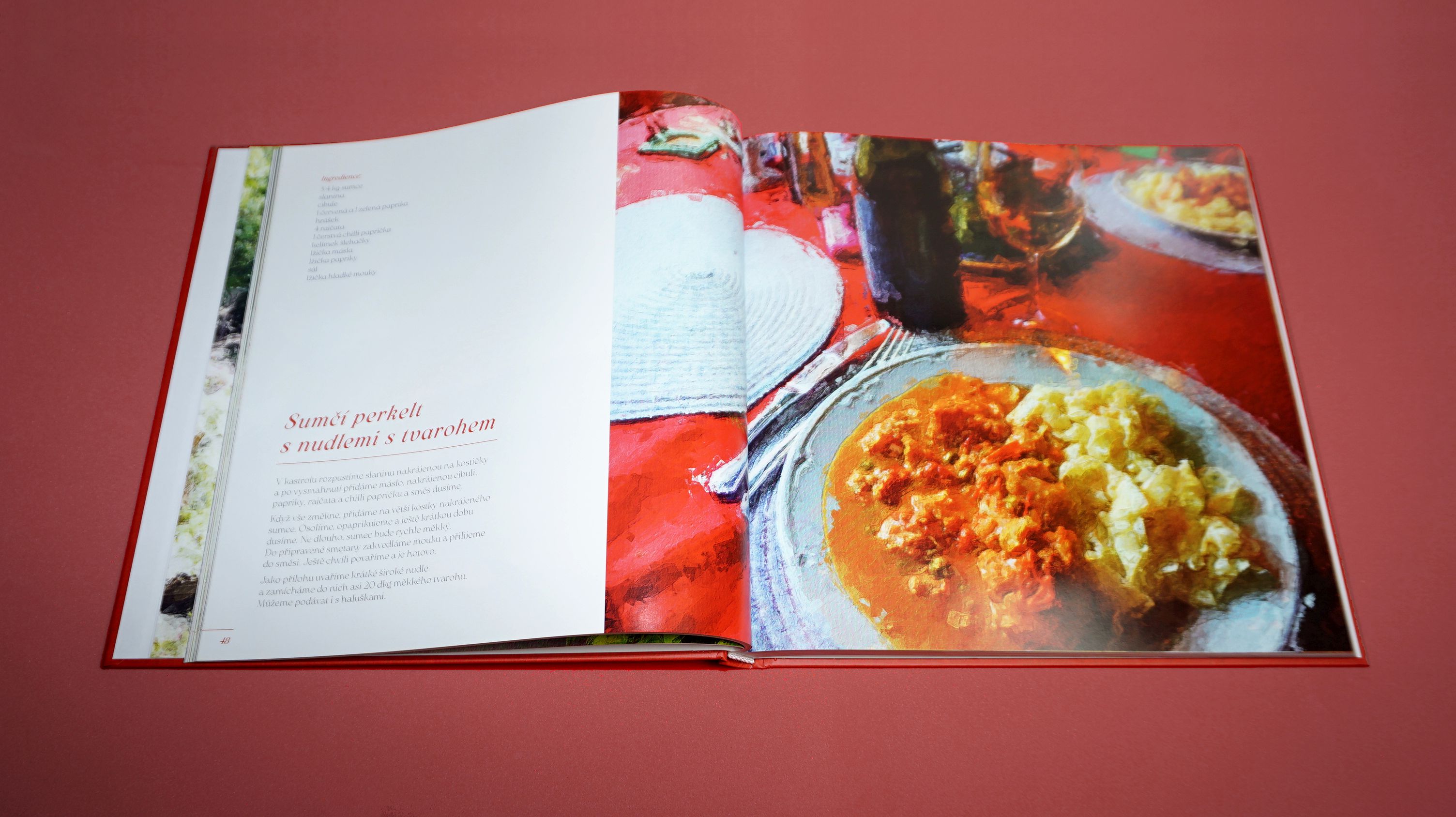