Dear friends, today is certainly a treat for all those, who revel in solid heavyweight death metal, for this day marks the official release of the new anniversary 10th full-length "Altars of Ignorance" of the Czech genre veterans Tortharry in digipack format! Order now on MetalGate e-shop! 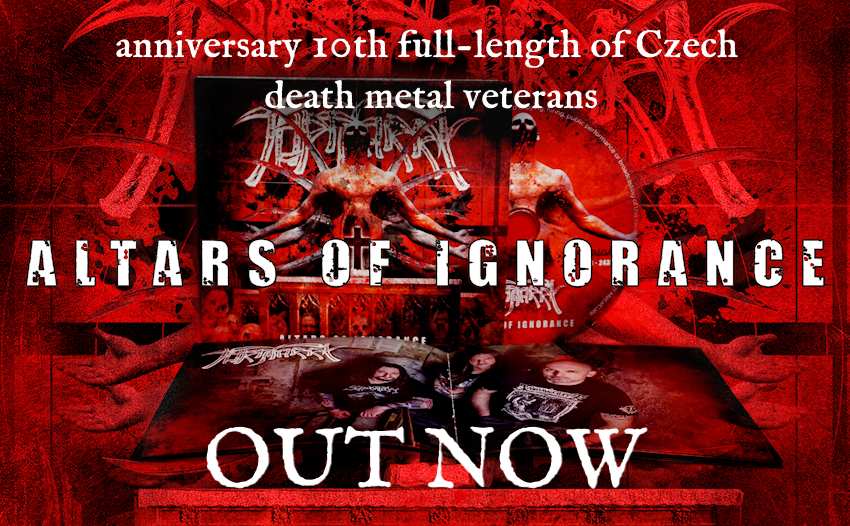 The 10th score by Tortharry! The new full-length Altars of Ignorance is out

Modern sound, pure death metal, maximum commitment… After three years, the Czech veterans Tortharry are back with a brand-new album Altars of Ignorance. And though the band is also celebrating this year their 30 years on the scene, there is no fatigue in sight. The new opus rolls like a bulldozer and will surely be a treat for all fans!

The nine tracks stem from the genre traditions, respect the roots, has the Tortharry signature, but at the same time move the band forward, offering a slightly different hue… “The way I see it, we indeed managed to record something somewhat different. And for me personally, it is, along with our debut When The Memories Are Free, the best Tortharry album in the whole 30 years. I hope time will prove me right,” says the bassist Martin Lemy Vacek.

Significant contribution to the final sound of the Altars of Ignorance is that of the producer Dan Friml, in whose The Barn Studio the album took shape. It was the second time Tortharry worked with Dan, as he produced already the preceding album Sinister Species. “Our cooperation was, same as in case of the last album, on a highly professional level. Me and the guys connect also on the personal level, so everything went smoothly indeed,” says Dan Friml. “The gave me complete freedom in the production, hence the album sounds different than its predecessor. It gravitates more towards the current modern sound, and I am really satisfied with the result! Post-production is also my doing, so I am furthermore responsible for the intro and outro, as well as for the track ordering. I really do look forward to when the album gets to the people!”

In fact, we are streaming this opus in full now on our YouTube channel, so check its musical qualities for yourself:

Another repeated cooperation was between Tortharry and the visual artist Jaromír Deather Bezruč. His take on the Altars of Ignorance frontcover thus follows the artistic direction that began already with the 2013 full-length Follow.

The album is released as usual by the Prague-based label MetalGate Records, with whom Tortharry annually co-organize the open-air festival MetalGate Czech Death Fest, which will take place this year after all. The three days long metal feast shall kick off June 17 in Červený Kostelec. Of course, Tortharry will perform, so there is your chance to hear the new songs from Altars of Ignorance live.

But that is not where the story ends. "Altars of Ignorance" shall also get its vinyl incarnation, the release date of which we will specify as soon as we have news from the manufacturing plant. So stay tuned for updates!