If you attended the Rebel Release Party, then you already know. If not, then it most likely reached you anyway. In either case, the second studio album "Rebel Against Me" of the folkmetal tribe Cruadalach is alive and kicking. Order your copy on MetalGate e-shop! 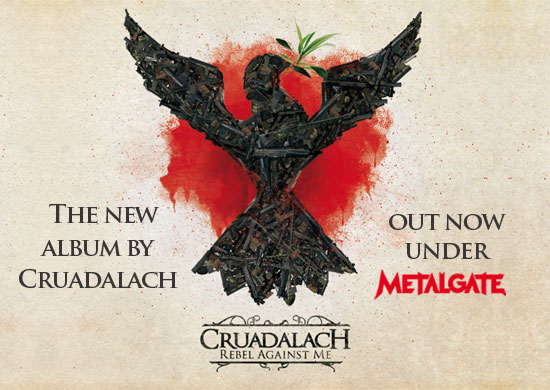 MetalGate Records just released the long awaited second studio album of one of the most distinctive representatives of folk metal in the Czech Republic, the eight-member strong tribe CRUADALACH. The “Rebel Against Me” album comes out in beautifully crafted form with coated slipcase and detailed booklet, in which, beside the usual lyrics, you can read about under what circumstances individual songs took shape and what themes they deal with. “The main goal was absolute authenticity. I am very much aware that if we played a harder folk-rock with Czech lyrics about Celtic gods, it would have some commercial potential, but, pardon the expression, fuck that,” says the band vocalist Jan Vrobel in the interview for the February issue of Spark Magazine, meaning that the second CRUADALACH album can surprise one with serious and contemporary themes that are utterly devoid of any genre cliché. The first enthusiastic reviews characterize the new songs as “experimental” or “connecting the previously separate”.

The “Rebel Against Me” album was ceremonially christened by Milan Trachta, veteran of the Czech hardcore punk scene and vocalist of the band HANBA, in the Prague-based Jamm Club, where the Tribe also revealed their new music video for the song “Life-Worshipping Bastards”, which will premier January 21, 2015, on band’s YouTube channel (“Tribe Cruadalach”).

The album contains 11 colorful songs, featuring, beside the eight core members, a number of guest musicians, be it from the Czech National Symphonic Orchestra, the affiliated bans CLAWED FOREHEAD, or the three fair valkyries from the Polish PERCIVAL/PERCIVAL SHUTTENBACH, whose vocals adorn the soundtrack of the upcoming Witcher 3 game.