Dear friends, here is the final segment of our "talks" for this year, and since this series follows closely our release plan, our conlcuding guests are of course Lukáš Hořínek and Alexandr "Krusty" Nováček, authors of the recently published book "Diagnóza 19932020: Syndrom zapomenutého ticha", the official history of the band FORGOTTEN SILENCE, which constituted the bulk of our interview. Enjoy! 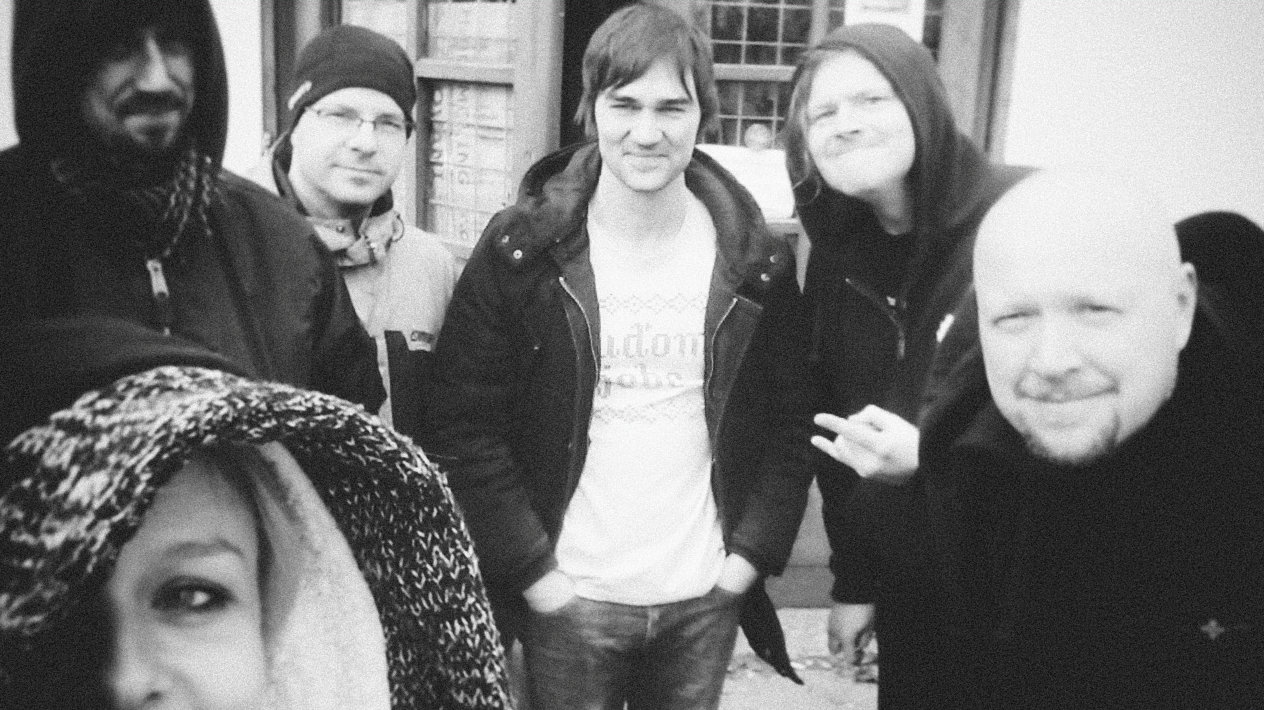 Forgotten Silence: Syndrom zapomenutého ticha is the kind of biography we ourselves would love to read

Late this year, the music fans got their hands on a unique book. Entitled Diagnóza 19932020: Syndrom zapomenutého ticha, it tells the story of the band Forgotten Silence. We discussed it with its authors Alexandr “Krusty” Nováček and Lukáš Hořínek.

The initial impulse for the making of this book was a series of interviews for the Fobia e-zine. When did you decide that your cooperation could lead into writing of the biography?

Lukáš Hořínek: It was something of an epiphany that happened to both of us at the same time. The interview series was such a good read that a book was the next logical step. We had been toying with the idea almost from the very beginning of the series. And when I finally swung into action and contacted MetalGate about it, things got serious and there was no turning back.

A vision is one thing, completing the project is another. What motivated you to see it through to the end?

Lukáš Hořínek: Motivation? For sure the undying enthusiasm, a great desire to try something new, as well as to get to know and to work with interesting people. Yes, I admit that I am a complete newbie is this regard, thus having no idea what working on such as project entails. So, many times things got excruciating, with us carrying through with grinding our teeth, but we knew that it will all be alright in the end and that the book will happen.

Krusty: Our motivation was to get it to such an end that will fulfill our expectations. No one will be interested in excuses as to why so and so was not done 100 %. The book will remain here forever, and we want to be able to say, even ten years from now, that it is a job well done.

Teeth grinding… Did you have doubts if you will manage it all?

Krusty: There were no doubts in our minds, though the fatigue was great at times. Especially the design took its toll, as we would meet with our designer Onehalph after work around 8 pm and end our sessions around midnight five days a week. But it was necessary!

Even the former members of Forgotten Silence had their say in the text. What was their reaction on the idea of the biography?

Lukáš Hořínek: Everyone who participated on this biography really pleasantly surprised me with their approach. Somebody went at it at great length, others need but several sentences. The important thing was to keep the distinct character of the individual members in the text, which I think we managed. There were only minimal revisions in case of their paragraphs, and it shows. All of them are magical beings, no difference there. (smiles)

Krusty, I assume that in recent years you were not in contact with all the ex-members. How was it talking with them again? Was there someone who declined to participate?

Krusty: The communication with our ex-members was handled by Lukáš. Not because of some damaged relations, but rather because Lukáš was quicker and had his concept, whereby knowing what to ask about. I managed to get in touch with only a few of our past colleagues. There was no one explicitly declining, but there were those who either simply did not respond to emails or phone calls, or we had no means of contacting. And it is a pity is some cases, as these people were important at one point or another for Forgotten Silence, though such is life.

Did you feel nostalgic when writing? After all, you were given large space for ample reminiscence…

Krusty: Of course, nostalgia ruled the day! To reminisce was highly nostalgic. It was very nice to thusly travel back in time, and sometimes it made me smile blankly while writing, which must have been weird to look at. (smiles). We have been through a lot and many past memories resurfaced only thanks to putting this biography together. I am the only one who remembers the roots of the band, however I am grateful to Medvěd for all his recollections, which made all of it fit together properly, even though our memories sometimes differ. (smiles) 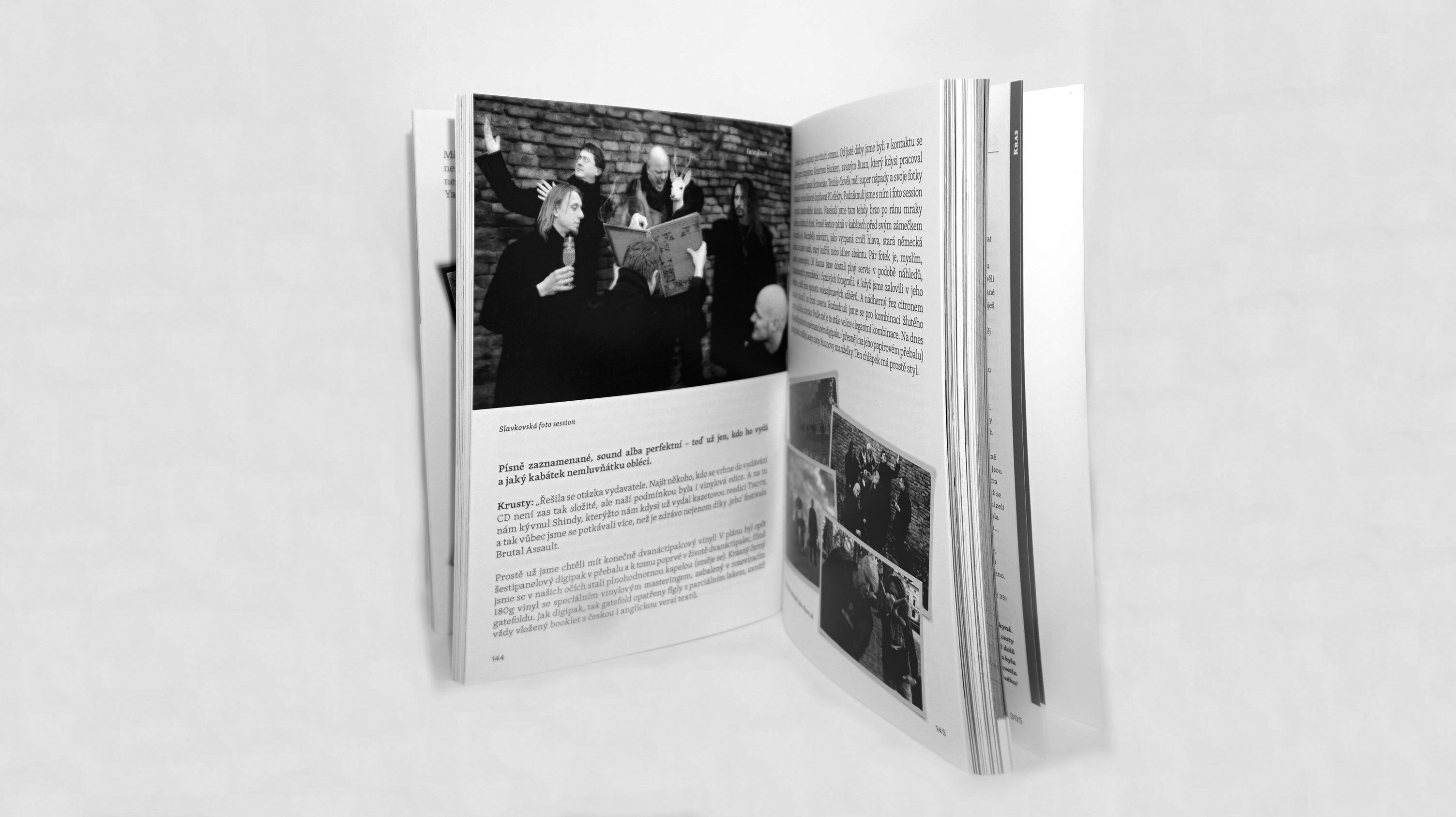 Which era of Forgotten Silence do you consider the happiest?

Krusty: Well, these are hard to answer tricky questions. A happy time was the beginning because we were young, carefree, and exploring. A happy time is also now because, though no longer young and carefree, we know and can do a lot more. And we enjoy it more. When we were beginning, the scene had an incredible drive. There was an incredible enthusiasm all around and I am sorry that younger or new bands have no chance now to experience this. Everything we released is for me a chronicle of our lives and linked to a particular time. So, it cannot really be compared. Nor can I compare the line-ups that recorded each album. We were a different band in times of Thots, a different one in times of KroNiKa, and a different one in times of La Grande Bouffe. Even so, our luck holds. (smiles)

Lukáš, what is your favorite era of Forgotten Silence?

Lukáš Hořínek: I cannot really answer definitively. I love all their albums and listen to them based on current mood. If I were to mention which ones I listened to the most in the last year, it would be Senyaan, La Grande Bouffe and Kras.

The book was published by MetalGate, which begs the question if Forgotten Silence as such is bound to sing to them eventually…

Krusty: We are a really strange band that goes to painstaking ends on every new material. We are thus unable to keep release dates set even years in advance, or to be flexible enough to get together and go play a promo show somewhere a month from now. We are scattered all over the Czech Republic, so we need to plan carefully indeed. During our career, our albums were released by Obscene Prod., Metal Age Prod., Redblack Prod., Shindy Prod., Epidemie Rec., or Doomentia Rec., and in each case both sides were happy with the way things went. Each of these collaborations was always fully functional and beneficial at its time. That said, since our demos we also practiced self-releasing, with which we are quite satisfied so far, even though/because everything is up to us. But to get to the answer, we will deal with such thing when we are close to recording a new album.

In fact, how is band doing? What is the current line-up?

Krusty: We are isolated from each other due to distance, the coronavirus and pregnancy, so we are keeping in touch via emails and text messages. If we get together, it is three people max, especially those of us from Brno. The current line-up? Should we take that to be the one that was supposed to play the book release show, and that is perhaps supposed the play our monothematic shows in Spring, then the line-up goes like this: Marty – keyboards, Kubýk Fritsche – guitar (Kandar, Pačes), Jiřík Biggles – guitar, vocals (Tomáš Klus band), Andrea – vocals, Čepa – drums (The Split) and me.

I know that you are a huge fan of classic rock. Have you ever been tempted to record a purely hard rock album, in the vein of Deep Purple for example?

Krusty: Well, you nailed it with Deep Purple, because I have been greatly enjoying this band during the past several years. Even more so than in their golden Blackmore era. And I suspect that they themselves are getting a mighty fun out of their existence. In my opinion, only the true, experienced rockers and excellent instrumentalists can make a really good hard rock album. And in truth, I cannot count myself among those. (smiles) I have the utmost respect for this kind of music, which makes it for me perhaps even untouchable. So, I can be tempted by whatever, but my self-censorship works. Besides, hard rock is also the matter of a great voice, of vocalists such as Gillan, Coverdale, Bonnet, Mercury, Dio, Halford… And those are missing here.

Many who witnessed the past times still remember Forgotten Silence as a metal band, thus being rather uninterested in your later direction. Looking back, can you say that you chose the less comfortable way in the years that followed?

Krusty: I cannot say. We chose “our” path, with our fans either following us, or parting ways with us. The decision is only theirs to make. We do not play music for a living, so we can do whatever we want. And if someone sees us as a former metal band, he should listen to the 2012 album La Grande Bouffe, which not only I consider to be our fastest and most metal release… So, everything is relative. If someone has such an opinion, I see it as a matter of age. Maybe he is no longer following us that closely from 2000 onwards, maybe he almost worships our early albums and has no desire to explore further.

The book is out… Are you looking forward to feedback from the readers?

Lukáš Hořínek: There are some minor trepidations, but yes, we do. The book is precisely the way we wished it to be, and if it speaks to and pleases someone else as well, we will be delighted.

Krusty: We are of course curious as to what the people from the scene will tell about it. We gave the book 200 % and are certain that Syndrom zapomenutého ticha is the kind of biography we ourselves would love to read!

Excerpt | Available in CZ only