MetalGate Records proudly presents: F.O.B. - and the foes have become our masters

It is here! The sixth studio album "...and the foes have become our masters" of the deathcore warmachine F.O.B. from Tábor is out now in digipak format. Order your copy on MetalGate e-shop! 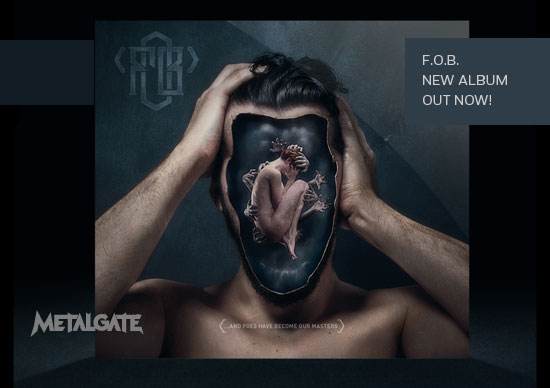 The wait is finally over! Two years after “Reap what you sow” MetalGate Records is unleashing upon the world its successor, the sixth full-length album of the deathcore pack F.O.B. from Tábor, whose name is “…and the foes have become our masters”. On the space of ten blasts what awaits you is an acoustic blizzard in the typical F.O.B. arrangement that combines pronounced guitar riffs, clockwork drum tempo, melodic solos and the unmistakable vocals of Mára which once again gravitates between growl and clean vocals. Music-wise, there is one notable novelty however, in the sense that the new album, compared to its predecessors, gives a lot more ground to death metal techniques and compositions, whereby F.O.B. enact a sort of back to the roots movement and reminisce their early style from the times of “Follow The Instructions” and “Default”. Fans of later F.O.B. need not to despair however, since the modern metal influences, which are an integral part of the band’s repertoire since “The Dice”, remain preserved. In a way, “…and the foes have become our masters” can thus be considered as a cross-section of this warmachine’s musical evolution. From the lyrical perspective, you can look forward to a wide range indeed, composed of purely personal themes, broader social reflections, as well as truly profound motifs of contemplations on the nature of being as such. Simply something for everyone.

The album recording sessions took place on the home turf, in the KOCIS Studio in Tábor. The final mix and mastering was then taken care of by the Empire Studios from St. Petersburg. Regarding the album art, it carries the signature look of Karel Kříž, vocalist of Gorgonea Prima, whose figural psychedelic compositions are more than apt companion to the overall vibe of the album.

The deathcore act F.O.B. from Tábor is active on the Czech metal scene since 1995. During the 20 years of existence, the band notably progressed style-wise from thrash-death-doom origins, over schizo blast metal period, to the deathcore presence. Behind F.O.B.’s belt are now six studio albums, one MC and two demos; also numerous live performances in clubs and on festivals both in the Czech Republic and abroad; as well as organizing the iconic festival Žižkův vraždící palcát