Dear friends and all worshipers of the iconic eccentric Tom Necrocock in particular, take heed as today marks the official publishing of Maestro's authorized biography by Václav Votruba in paperback format as the first installment of a brand-new book series Dělníci kovu! Order now on MetalGate e-shop! 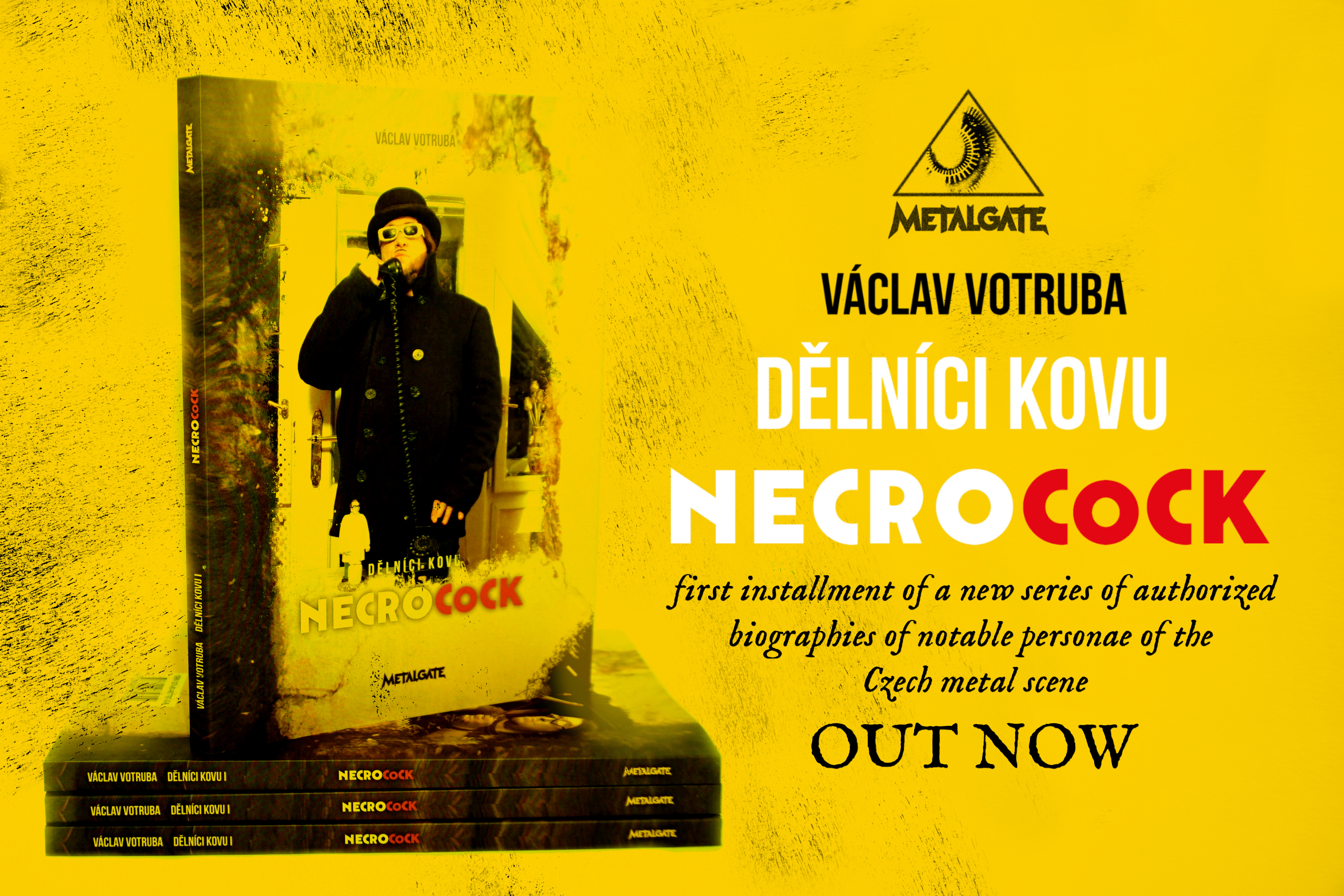 The Czech metal literature has a new distinct addition to its ranks – an authorized biography of the iconic Tom “Necrocock” Kohout, penned by the South Bohemian writer Václav Votruba. Entitled Dělníci kovu I: Necrocock, the book was published in early June by the Prague-based MetalGate Records.

“I used to read biographies about various rockstars, their excesses, rioting and all the as if crazy stuff they did. But it was like you read one, you read them all; with them defiling some groupies when high or demolishing something now and then. As far as I know, none of them ever did enemas in public, as well as did not release urine from an inserted catheter during a show,” says Necrocock. “So, I figured that I should have a book, my own, and I kept waiting for someone to take up on that challenge. Then I let the idea go, surmising that I will do it myself when I am old, with the book thus being very much incomplete and full of holes, since aging and alcohol bode ill for my memory. Last year however, I got contacted by the jolly South Bohemian Václav Votruba, who was determined to get it done. I was of course thrilled, and we immediately started working on that.”

The book is structured chronologically from Necrocock’s early childhood performances for his family, over puberty, first experiences with sex, first bands, his travels, all the way to today. “Each week one chapter and one stage of my life. I pushed for the book to include a lot of photos, as many of them tell more about me than some lengthy narration. I was also happy that the publisher arranged Chymus to do the book’s layout, for he has a sense for perversion and also rather knows me from making art for some of my early albums, when he even slept over in my Gummistudio Y,” adds Necrocock. “All in all, what we have here is an intriguing, absorbing and epic book, wherein the reader will learn how it really happened back then, and will understand much about my sophisticated depravity. That said, I am not opening the doors to my noble soul all the way. I read the book already several times and feel that its protagonist should become the model for today’s young boys. Everyone must fall in love with him. Albright then, the first book about myself – check. Now it needs a movie.”

“It was truly intense six months me and Necrocock went through, as I kept bombarding him with hundreds of questions. The whole thing happened in the utmost easygoing atmosphere, making me almost regret that our mutual journey is at an end,” smiles Václav Votruba. “I am overjoyed by the outcome. It is no dry biography intended only for the most hardcore fans, but a captivating piece full of spontaneous tales. Necrocock is utterly unique, and singular is actually this book as well.”

Gear up for 168 pages describing Necrocock's life from early childhood performances for his family, over puberty, first bands, his travels, all the way to today. Of course, included are various piquancies. The piece also features over 100 photos from Necrocock's own archive.

P.S.: We received some inquiries regarding an English edition of this book. If there are more of you, who would to see this translated, please let us know. And if there is enough of you, we will gladly do so.