Dear friends, the season of Fall gigs is here, and we too intend to contribute, for our MetalGate Booking division has been busy, preparing for this October and November three, genre-wise diverse, tours. 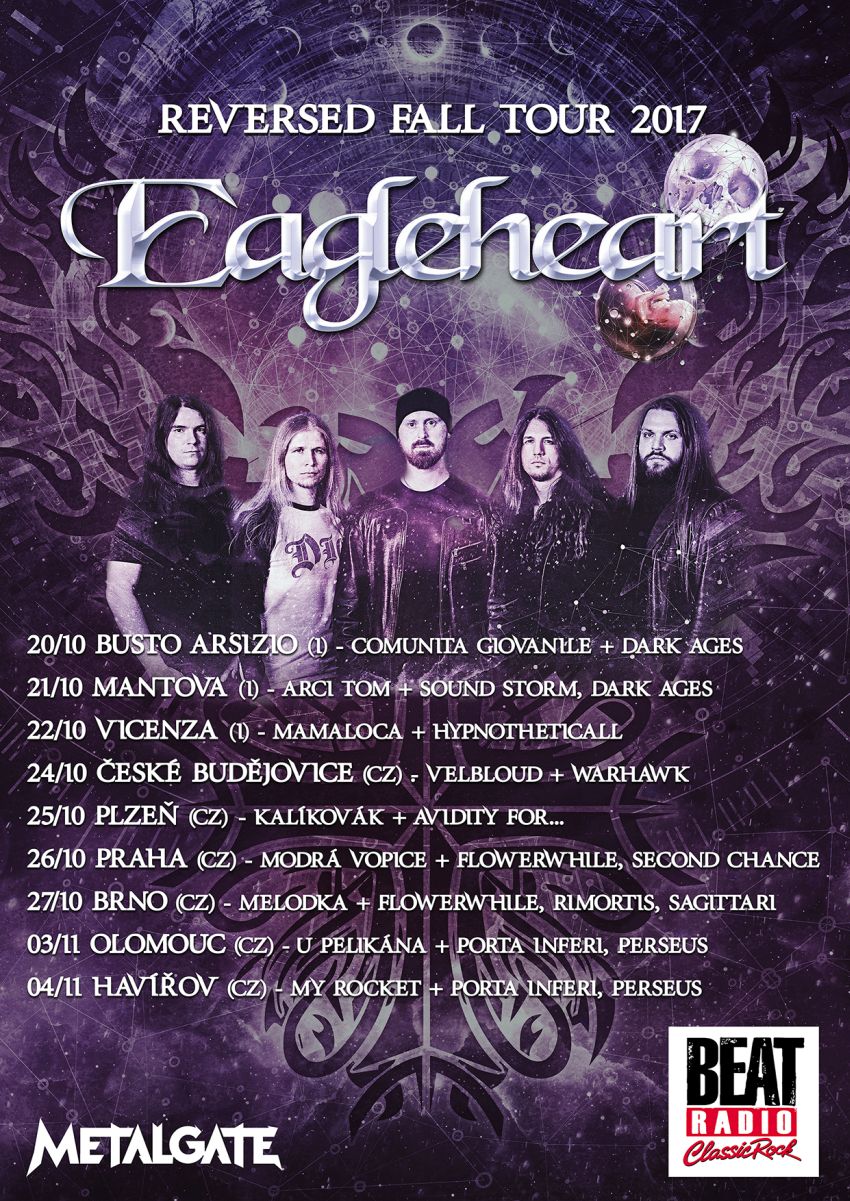 The first enterprise is the Reversed Fall Tour 2017 of the top Czech power metal act EAGLEHEART, which is currently kicking off with two shows in Italy, afterwards moving to the Czech Republic for seven more shows, including their home turf of Brno.

The tour is aimed at promoting the new album "Reverse", which was released August 18 by the Italian label Scarlet Records, and about which the reviews have nothing but praise thus far. The band has come up with its most ambitious, dynamic, emotional and epic album to date, this time with three vocalists. It is no overstatement to say that EAGLEHEART are now stronger than ever.

Needless to say that EAGLEHEART will not forget about their older songs, so their classics will be included in their tour setlist. All the fans of progressive power metal, get ready for a blast! 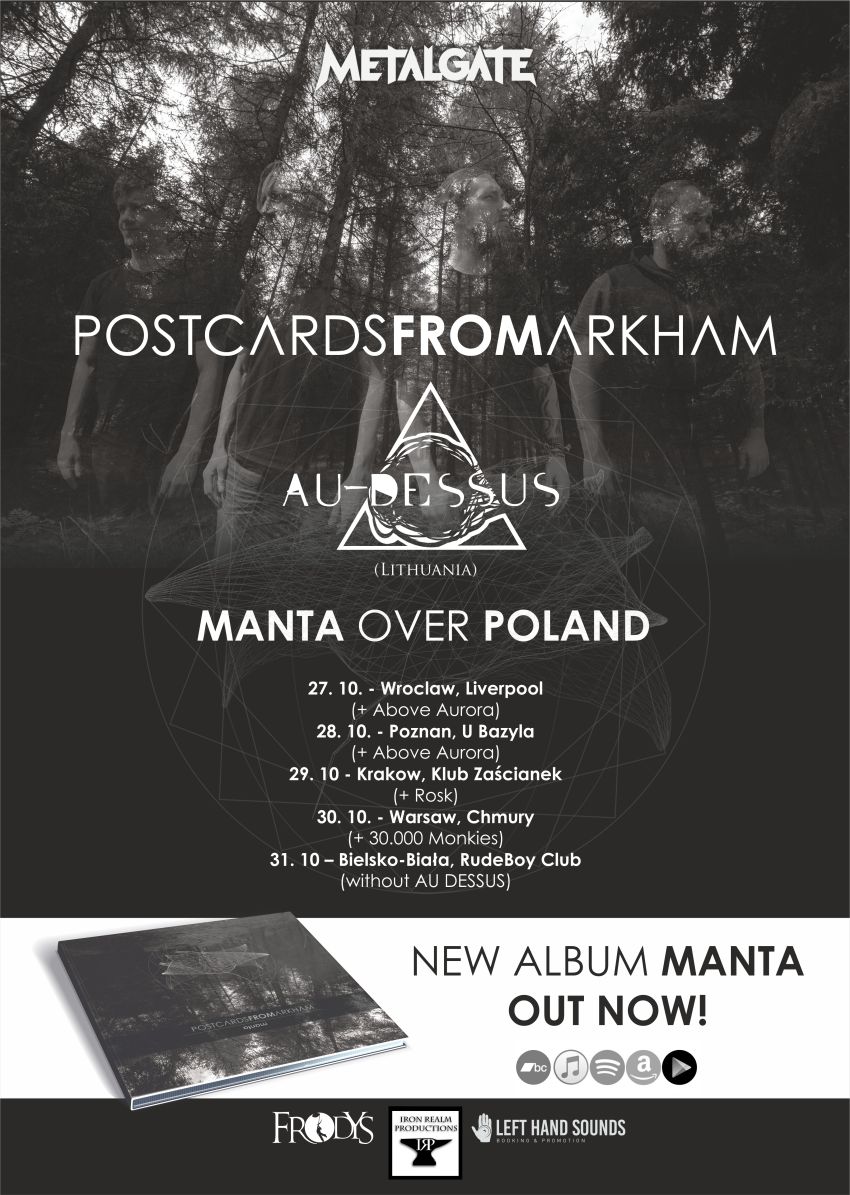 The second enterprise is a treat to All Polish fans of atmospheric post-rock and of the weird universe of the American novelist H. P. Lovecraft, for their homeland shall host the next tour of the Czech Lovecraftian post-rock project POSTCRADS FROM ARKHAM that is coming between October 27 and 31 during Manta Over Poland to Wroclaw, Poznan, Krakow, Warsaw and Bielsko-Biala to present their latest album “MANTA”, which was released this August by MetalGate Records.

The successor of the no less original album “ÆØN5” (MetalGate Records, 2015) finds the act in a darker vibe. Whereas the previous piece built on Lovecraft’s “dream cycle”, “MANTA” takes its listener to the cosmic depths beyond the so-called “angled space”, that is, to the realm of incomprehensible chaos. Hence the rawer approach to the new compositions, in which the guitar-based post-rock techniques were enhanced with a live string quartet, as well as with unusual acoustic instruments, such as djembe. Unlike the previous pieces that were dominated by spoken word, the current album includes traditional vocals that however alternate with purely instrumental tracks. The unique mosaic that POSTCARDS FROM ARKHAM are creating, now gained another, again somewhat different, piece.

And since the new album must be properly promoted, thus comes into play the aforementioned Polish tour, which was organized in cooperation with the agencies Left Hand Sound and Iron Realm Productions, and on which POSTCARDS FROM ARKHAM shall be joined by the Lithuanian post-black metal band AU-DESSUS. 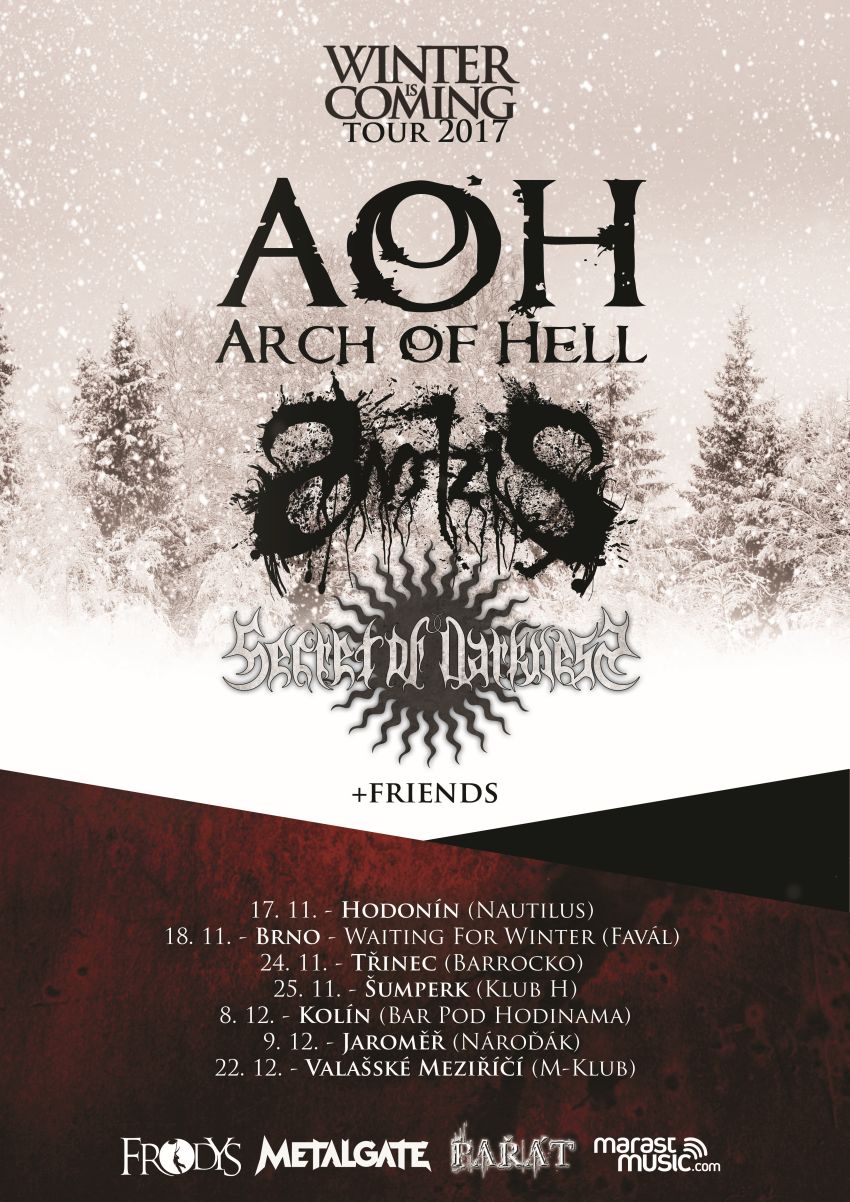 Finally, there is the Winter is Coming Tour 2017, a joint weekend tour of ARCH OF HELL, AWRIZIS and SECRET OF DARKNESS, which shall commence between November and December, and shall take all three bands into various places in Czech Republic. The bands promise to showcase new songs, and there will also be raffles on each show.

As far as new music is concerned, the most headway comes from the hybrid metal pack AWRIZIS (and by hybrid metal we mean a fusion of groove and melodic death metal), who are fishing their new album, which is to be unleashed next year. However, the band shall present songs from this piece already on this tour.

Finally, the symphonic metal hydra ARCH OF HELL shall go retro with the re-edition of their still sought-after debut "One Day". And as re-editions go, a bonus is always in order.

Beside this trinity, the individual shows shall also feature local guests, so there will be no shortage of musical diversity as well as of headbanging opportunities.