If you have been following us for a while now, you may know that since 2013 we have been doing in Prague once every two years a special club show dedicated to Greek, primarily black, metal. This series is called HELLENIC DARKNESS and since its thus far last installment was in 2015, it is only logical for the darkness of Hellas to return to Prague next year!

Thus, HELLENIC DARKNESS 2017 shall take place Saturday, March 18, 2017 in the Prague club Nová Chmelnice and shall as usual feature three envoys of the Greek scene and two local support bands. 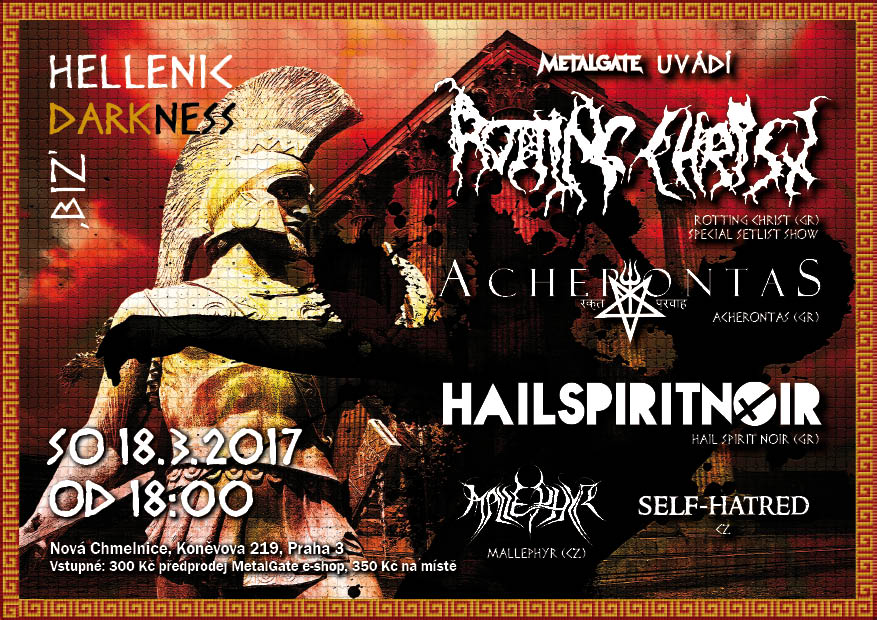 Spearheading the line-up is traditionally the phalanx from Athens ROTTING CHRIST, and though they visited Czech Rep. twice this year when promoting their latest album “Rituals”, you should not miss them in this third case, for on HELLENIC DARKNESS 2017 Rotting Christ will play a special setlist dedicated to their early days!

For the second envoy, we reached to the depths of the Hellenic underground, whereby we bring you the black metal coven of Sumerian mystics ACHERONTAS that released last year their fifth full-length album “Ma-IoN (Formulas of Reptilian Unification)”.

The third emissary comes from experimental waters and it is the Thessaloniki trinity HAIL SPIRIT NOIR, playing psychedelic prog black since 2010. In Prague HSN shall present their new album “Mayhem in Blue” which was released this October and is already being praised by countless critics.

Czech colors on HELLENIC DARKNESS 2017 shall be represented by two bands from Western Bohemia, i.e. by the black-death horde MALLEPHYR and the doom-black melancholiacs SELF-HATRED. Both acts shall present their new debut albums “Assailing the Holy” and “Theia” that also already received praise in reviews.

So, even the third act of the Hellenic invasion to Prague shall not lack in genre and ambience diversity.

Purchase your tickets now for 11 Euro on MetalGate e-shop! Available as both print and e-tickets.

Darkness calls! See you there!